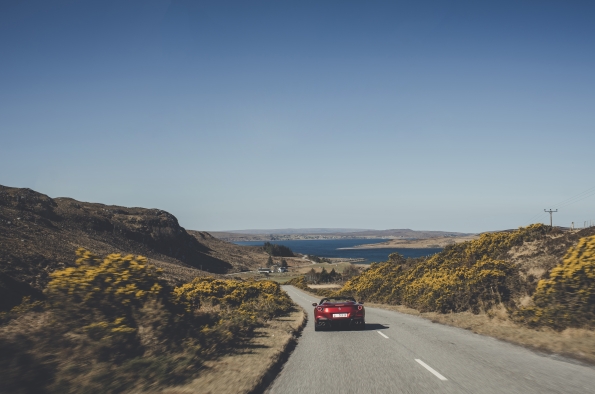 As part of the launch campaign for the new Ferrari Portofino M, the famous ‘Prancing Horse’ brand featured the ‘Wild Atlantic Way’ and Northern Ireland’s coastal route on its ‘Rediscovering our roads’  – a staycation guide to the UK & Ireland – Discover for yourself!

The west coast of Ireland should be included in every top five list of The Most Beautiful Places in the World. The Wild Atlantic Way is a 1,500 mile touring route that starts in the rugged mountains of Donegal in the north, passes through buzzy Galway and ends at the unspoilt southern beaches of Cork, with stunning Atlantic views to the starboard side for much of the way. And along the route, you’ll find incredible seafood and unforgettable pubs. Lots of them. Take your time with this one.

From Donegal, drive south along the N15. As you head towards Sligo you’ll also pass Ben Bulben, Ireland’s answer to Cape Town’s Table Mountain and, just beyond Sligo, Carrowmore which is home to 60 megalithic tombs. From Sligo, take the N4 followed by the N59 and drive west towards Aughris Head, where the fabulous thatched Beach Bar awaits. At Ballina, take the R314 north. One of the most impressive stretches of the Wild Atlantic Way is Dún Briste, a 50m high sea stack upon which the waves smash.

The next section of the Wild Atlantic Way brings you through pirate country. Carraigahowley Castle was home to ‘The Pirate Queen’, Grace O’Malley. Achill Island is accessible by bridge and its Atlantic Drive, to the south, has some of the best sea views of the entire route. Continuing the journey from Achill to Westport on the N59 you pass along Clew Bay which, they say, is home to 365 islands – one for every day of the year. No wonder it was a pirate mecca.

At Westport, take the R335 until it meets with your old friend the N59 again. Along the way you may wish to stop to climb Croagh Patrick mountain. Thousands of pilgrims visit the 760m mountain on the last Sunday of July each year. Its history as a place of worship pre-dates Christianity to 3,000BC. Patron saint Patrick is said to have fasted for 40 days here and, according to legend, banished snakes from Ireland from this very spot.

Extend your route at Clifden, the capital of Connemara, by peeling off the N59 and taking the Sky Road, which loops around the peninsula and affords incredible views of Clifden Bay. Once back in Clifden, take the R341 and visit Aillebrack Beach, Dog’s Bay and Gorteen Bay for beautiful, unspoilt beaches. Stop in Roundstone for a drink and some seafood at O’Dowd’s, overlooking the idyllic harbour.

The spectacular beaches continue off the R336 towards Galway, including Coral Beach and Silverstrand Beach, geological wonders with marvellous views of the Aran Islands.

Galway is the only city you’ll encounter before Cork, and it’s a lively place. Steel yourself for some of the northern hemisphere’s best bars. Whiskey drinkers go to Garavan’s or Sonny Molloy’s, as both have incredible rye menus. For traditional Irish music, head to Crane Bar, and for a quiet pint the locals recommend the Bunch of Grapes and Lonergan’s (no websites).

The world’s most famous milliner, Philip Treacy, is a native of Galway and has turned hotel designer with his five-star property The G. The décor is not to everyone’s taste, but they’re won over by the comfortable rooms and excellent cuisine. Less divisive is the beguiling Glenlo Abbey Hotel, an 18th century country house just outside the city. Its Pullman dining room is comprised of two antique railway carriages, once stars of Murder on the Orient Express, now repurposed as a plush restaurant.

There are many other food options, though, and if you’re willing to splash out then try the Michelin- starred Aniar, centred around Galway’s terroir and boasting a ten-course tasting menu.

Beyond the city, take the N67 and the R477 and savour the karst lunar-looking landscape. The hills of The Burren are composed of limestone pavements. Unique flora thrives here, as well as arctic and alpine plants.

The Cliffs of Moher in Liscannor, County Clare, are Ireland’s most visited natural attraction. Reaching over 200m high, they were formed some 300 million years ago.

Rejoin the N67 at Lahinch and head to Kilkee in the heart of West Clare. The Loop Head Drive takes you within metres of the cliffs, and the rock formations are up to 80m high, bracing themselves against the turbulent tides. Keep an eye out for dolphins as you cross the Shannon Estuary and take the R551 to Tralee. This town is famous for its annual and televised Rose of Tralee beauty contest, held each August, which is – shall we say – more Father Ted than Hawaiian Tropic pageant.

From Tralee you begin what is perhaps the most magical section of the whole Wild Atlantic Way, especially the sections known as Connor Pass (Ireland’s highest mountain pass) and Slea Head Drive. The Dingle Peninsula is an at-times narrow route along cliff-face roads beyond the N86. Pull off at Camp and take the R560, then loop around the R559 and enjoy the views of the Blasket Sound – perhaps take the boat from Dunquin to visit the abandoned village on Great Blasket Island.

The little town of Dingle is a must-do for fans of Irish pub culture. The population is only 2,000 yet there are 50 inns here, and they all try to outdo each other on the quality of their Guinness. We particularly rate Foxy John’s, which doubles as a hardware store in the daytime, and Adams Bar which moonlights as a cobbler’s. If stout’s not your thing, visit the Dingle Distillery and try the local whiskey, gin and vodka.

After an evening of lively Irish entertainment you’ll be abandoning your Portofino M and staying the night. With their high thread count, Castlewood House and the Dingle Bay Hotel both provide a soft landing.

Take the N86 out of Dingle followed by the R561 and the N70 south from Castlemaine. This road, which loops around the Iveragh Peninsula to Kenmare, is called the Ring of Kerry.

The 10,000-hectare Killarney National Park features the highest mountain range in the country, the Macgillicuddy Reeks. Another Kerry highlight is Skellig Michael, a UNESCO World Heritage Site seven miles off the Iveragh Peninsula. Rising dramatically from the ocean, the island is home to a monastery that has existed in beautiful isolation for 1,300 years. Accessible by boat from Portmagee, Skellig Michael serves as a spectacular filming location for Star Wars: The Force Awakens and The Last Jedi.

Next is the Ring of Beara, which is less touristy than the Ring of Kerry and takes the R572 from Kenmare, followed by the R575 and R572 to Glengarriff, where one joins the N71. While touring the Beara Peninsula, visit the ancient stone circle at Ardgroom, and stop in Allihies to visit the two strikingly decorated pubs next door to each other in the town (O’Neill’s and The Lighthouse Bar), or the equally colourful village of Eyeries.

The final stretch is the Mizen Peninsula along the south west tip of the country, taking the R591, R592 and N71. Fastnet Rock is known as the ‘Teardrop of Ireland’ as it’s the last image of their homeland that emigrants would see on their sail to the New World. At 54m, it’s home to Ireland’s tallest lighthouse. The N71 leads east to Cork and the finish line of this fantastic journey. Have a Murphy’s at The Abbot’s Ale House (warning: do not ask for Guinness in Cork!), you’ve earned it.

Skirting the Irish Sea and rugged North Atlantic coast, the Causeway Coastal Route is a scenic drive taking the A2, B15 and A2 again in an arc between Belfast and Derry. The journey through County Antrim includes bracing beaches, craggy cliffs, biscuit tin villages, fishing hamlets, sweeping bays and ancient fortresses. Such is its raw, elemental beauty that Lonely Planet has voted it the No.1 region in the world to visit.

Taking the A2 north out of Belfast, with the sea to your right, one passes Carrickfergus Castle, one of Ireland’s best preserved Medieval buildings.

In Carnlough, just over an hour into the drive, is the Londonderry Arms Hotel. It was built in 1848 as a coaching house for the Marchioness of Londonderry, and was later owned by Winston Churchill. Quirky rooms are available, decorated tastefully with antique furniture, including the one Sir Winston slept in.

The scenery between Cushenden and Ballintoy Harbour may be familiar to fans of Game of Thrones, the latter – located alongside the B15 – doubling as the Iron Islands. Settlers here have been traced back 9,000 years. You may wish to take the A44 south at Ballycastle to visit The Dark Hedges, an atmospheric avenue of twisted beech trees that was filmed for GoT.

Keep driving west along the coast and you’ll come to the Giants Causeway, a UNESCO World Heritage site comprising 40,000 interlocking basalt columns. Legend has it this was built by mythological giant warrior Finn MacCool to get halfway to Scotland and challenge a Scottish giant to some fisticuffs. Further along the A2 is Bushmills, home to the Old Bushmills Whiskey Distillery, and the ruins of Dunluce Castle, perched dramatically on the cliffs, which inspired CS Lewis’ Narnia.

For brunch and dining, The French Rooms in Bushmills is a nod to the region’s Huguenot settlers, who were greatly involved in the Ulster linen industry. It serves Gallic classics such as tarte flambée and roast suprême of guinea fowl. For grub more typical of the coast, the best fish n’ chips can be found at Morton’s in Ballycastle. Nobody’s cod and haddock comes fresher. Should you prefer to stick to the theme of the Portofino M, you may wish to eat at Amici in Portstewart, overlooking the ocean, which takes enormous pride in its charcoal oven pizzas.

Fascinating ruins and sheltered gardens are to be found in County Derry’s beautiful and mysterious Downhill Demesne, a National Trust property affording spectacular views of Mussenden Temple and the North Atlantic. The basalt cliffs at Binevenagh give a panorama from Lough Foyle to Donegal. Guarding the entrance to Lough Foyle is another beauty spot, the remote Magilligan Point nature reserve – a paradise for twitchers. This is the tip of one of the largest sand dune systems in the British Isles.

From here, it’s a 40-minute drive to Ireland’s only remaining walled city, Derry. Park the car and cross the River Foyle via the suspended Peace Bridge, a symbolic walk from Derry’s ‘waterside’ to the ‘cityside’.