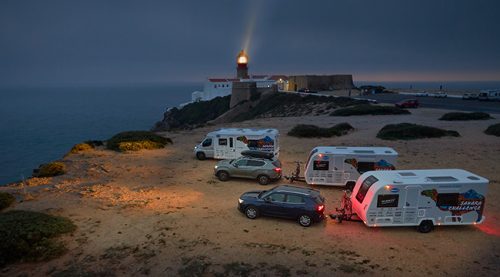 The journey to ‘The End of the World’ and back set off from the company’s South Liberty Lane production facility in Bristol and travelled through Spain and Portugal before recent events caused the team to return to the UK
The journey was undertaken using two Bailey caravans, pulled by SsangYong towing vehicles, and one motorhome
The ‘Sahara Challenge’ was due to take 20 days to complete with the team experiencing a wide range of road and weather conditions en route
This will have been the fourth real-life long distance test Bailey has undertaken in recent times. The Sahara Challenge followed successful trips across the Australian Outback (‘West to East Challenge’), to the Arctic Circle (‘Arctic Adventure’) and to Asia (‘Bristanbul Challenge’)
Bailey of Bristol complete 8-day tour to ‘The End of the World’ and back amid Covid-19 outbreak as new 3,500-mile intercontinental caravan and motorhome adventure to the Sahara Desert is postponed until 2021.

Having made it as far as Sagres, Portugal, or as it is better known ‘The End of the World’, recent events have caused Bailey of Bristol to turn around and return to the UK on their ‘Sahara Challenge’.

Having journeyed to ‘The End of the World’, developments around the Covid-19 virus across Europe, resulted in Morocco closing its borders to all maritime, meaning access into Africa would not be possible.

Bailey of Bristol, in association with the Caravan and Motorhome Club, were midway through their latest inspiring 3,500-mile intercontinental caravan and motorhome adventure to the Sahara Desert, when it became known that ‘The End of the World’, would be the end of the epic adventure.

Being in self-contained units had allowed the team to change their plans at a moments notice, one of the many advantages of a caravan or motorhome adventure. While the majority of team members were flown home, a skeleton crew had stayed on, responsible for driving and towing the vehicles for four days through Portugal, Spain and France.

Using the Caravan and Motorhome Club’s invaluable Red Pennant service, the remaining team that included Bailey of Bristol Marketing Director Simon Howard and Bailey of Bristol brand ambassador Lee Davey, travelled from Sagres, Portugal, through the centre of Spain via Seville, before arriving just over the Spanish and French border at Biarritz on Saturday 14th March, after two-solid days of driving. The skeleton crew then made their way to Normandy, before boarding an overnight ferry from Caen to Portsmouth.

On the 8th March, the ‘Sahara Challenge’ crew set off from the company’s South Liberty Lane production facility in Bristol, and travelled through Spain and Portugal to the famous landmark on the south-west tip of Portugal. It was there that the news broke that due to the rapid rise of the Covid-19 virus, Morocco had closed its border, meaning Bailey of Bristol would be returning home.

Taking two caravans (a pair of Discovery D4-4 models) pulled by SsangYong towing vehicles and one motorhome (an Alliance SE 76-4T), the marathon journey was to take 20 days to complete with the team experiencing a range of potentially extreme road and weather conditions along the way.

West to East Challenge 2015: 3,500 miles from the west coast to the east coast of Australia through the centre of the country with two Bailey Alu-Tech caravans

Sold! Rosetta Holiday Park in Peebles in the ...

COVID-19 update from Bailey of Bristol