First catch and release salmon of 2020 caught in Leitrim 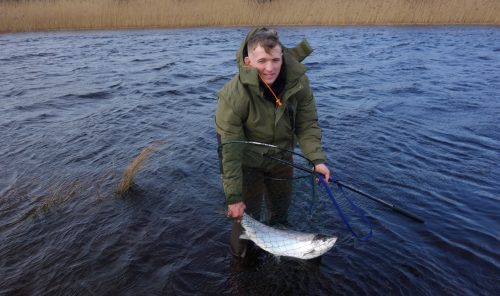 The first catch and release salmon of 2020 has been caught on the River Drowes in Co. Leitrim according to Inland Fisheries Ireland. Nash Mc Daid, of Ballybofey, Donegal landed the first catch and release salmon at the “point of the meadow” on the River Drowes at 2.45pm, Friday the 14th of February. The salmon, which weighed approximately 12 pounds, was caught on a Red Flying C before being released into the water.

Inland Fisheries Ireland awarded €250 prize money to the angler for the first catch and release salmon of the New Year. The prize was only eligible for the release of the first salmon which was handled correctly and verified by Fisheries Officers.

Dr Ciaran Byrne, CEO of Inland Fisheries Ireland said: “I would like to congratulate Nash Mc Daid, on the first catch and release salmon of 2020. I would urge anglers to step up their conservation efforts and engage in catch & release angling in 2020. Last year we celebrated the International Year of the Salmon and its main aim was to raise awareness of the many challenges facing salmon stocks across the Northern hemisphere.

Salmon populations have plummeted in recent years with the number of salmon returning to Irish shores decreasing by over 70 per cent, which is very concerning. I would like to take this opportunity to encourage all anglers in 2020 to ensure their own personal contribution to the conservation of salmon by practising catch and release fishing. Inland Fisheries Ireland will continue to support salmon conservation through research, protection, habitat conservation and development of our precious resource.”

The River Drowes is open for fishing during the 2020 season. The regulations for the management of the wild salmon and sea trout fishery for 2020 including the list of open, catch and release and closed rivers can be found at: https://www.fisheriesireland.ie/Salmon-Regulations/salmon-regulations.html#tab2.

Inland Fisheries Ireland is also inviting the public to help protect and conserve the fisheries resource during the year by reporting incidents to its confidential hotline number 1890 34 74 24 or 1890 FISH 24. The phone line is designed to encourage the reporting of incidents of illegal fishing, water pollution and invasive species.

Anglers looking for fishing information in Ireland during 2020 should visit www.fishinginireland.info for all the latest angling news and reports. For more information about Inland Fisheries Ireland, visit www.fisheriesireland.ie.

Fish under “distress” during current heat...
Internet for all the family with the WiFi VAN T400 router Dometic inaugurates new European Distribution Center in Germany