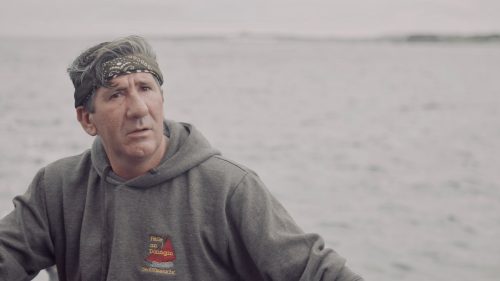 In this 2nd series of Bádóirí, we once again hoist sails with eight families, sailing Ireland’s oldest and most native boats,
in the Galway Hooker Association racing league. Starts 5 March at 8pm on TG4

With a new boat joining the fleet the rivalry is local and intense, the competition fierce, and the waters treacherous.

On the western edge of Europe, lies an unique culture that depended and fought with the Atlantic Ocean for thousands of years. It is the native sailboat, the Galway Hooker, that sustained this poorest of communities, and the new generation of these same families of sailors still sail the coast of Connemara, now racing to be champions. The rocky inlets west of Galway Bay host the Galway Hooker boat racing series each year.

Once the workhorses of the West coast, the distinctive rust-red calico sails of the Galway Hookers now race for glory throughout the Summer months. In series 1 we saw the family owned boats battle one another for the coveted prize of All-Ireland champions. In this new series we introduce a new boat and a new family to the fleet. Young and eager to impress this new crew from ‘The Truelight’ boat become a racing force to be reckoned as all the crews push themselves and their boats to their limit. The rocky inlets west of Galway Bay host the Galway Hooker boat racing series each year.

In this 2nd series we also delve deeper into sailing families lives and histories. An illness to one of the skippers bring the boatmen together where they share their personal stories as well as their hopes and fears from their sailing culture. Towards the end of the series the racing and rivalry becomes more intense and the waters become treacherous.

Producer and Director of Bádóirí Donncha Mac Con Iomaire says, ‘There are few societies in the world where a 200 year old boat is the epicentre of the same family for 2 centuries. The maritime community of Connemara never underestimates the Atlantic, and the unity of their families cannot afford to succumb to failure at sea. This ancient world that works hard and plays hard is what is still most genuine culture of Ireland.’

The Hookers awaken from the long Connemara winter, only to find new contenders aboard for this seasons regattas. The preparations have started in earnest, and we follow the sailors as they race each other in the first of the Summers races.

With the racing season under full sail, the skipper of the Truelight is finishing a new home for his family, Tommy Kelly inspires the local minor football team, and a new generation of mariners are developing their skills with the local sailing clubs.

It’s mid-Summer and as the competition heats-up in the races, the Naomh Cáilín crew hit the rocks both in cars and boats, Peadar Bailey of the Capall receives bad news regarding his health, refereeing the regatta is an unforgiving job, and Pat Mhicheal returns home to the island where he grew-up.

As the Truelight makes her intent clear for next season, boatman and renowned singer-songwriter, John Beag, tells of the huge reportoire of songs composed about the Galway Hookers and their owners, exotic musical sailors arrive in Inis Meáin, and the Tonaí is once again crowned champions of the Galway Hookers Association league.

The Ocean Race and Ocean Bottle team up to ta...
Open call for women to try fishing Internet for all the family with the WiFi VAN T400 router