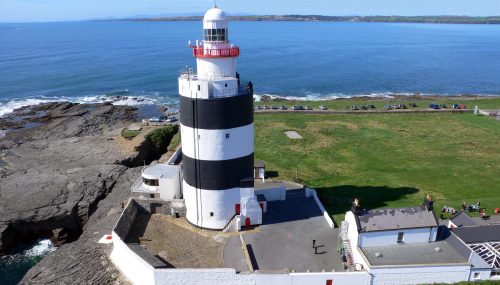 The Hook Lighthouse venue and tour experience has been shortlisted for the prestigious British Guild of Travel Writers world tourism awards 2018.

The British Guild of Travel Writers is the UK’s leading organisation of travel media professionals, established in 1960. The Guild is a rubber stamp of quality. The name stands for reliability and respectability in the fiercely competitive worlds of travel journalism. The criteria for membership if the guild is incredibly tough – and every single one of the guild’s 270 members has to satisfy an annual audit to retain Guild membership.

Only Guild members can nominate tourism attractions and destinations for the annual awards and the award-winning global travel writer and guild member Isabel Conway nominated Hook Lighthouse during the summer of 2018. Since that initial nomination, Hook Lighthouse has undergone a rigorous judging process by the British Guild of Travel Writers and it has now made it to the finalist selection as just one of 3 attractions/projects in the running for the best tourism project in UK and Ireland award 2018. The Tourism Awards are for those for the travel trade and judged entirely by the Guild.

Speaking on the news of the shortlisting Manager at Hook Lighthouse Ann Waters says,” It is a huge honour for us to be shortlisted as one of three for the best tourist attraction in the UK and Ireland 2018. The British Guild of Travel Writers awards are nominated and voted on by the industry’s best travel writers, therefore, the profile of benefit to us of reaching this stage alone in the awards is incredible. All of the team at Hook Lighthouse are thrilled and honoured, the entire team works very hard to ensure each and every visitor enjoys their experience at Hook Lighthouse and this shortlisting is a testament to that hard work.

We are also delighted to showcase what we have to offer here on the Hook Peninsula as part of Ireland’s Ancient East to a world stage audience at the London awards event, it is truly a great honour.”

The next stage of the awards process is a private Guild member voting opportunity to choose each winner in the three categories -UK and Ireland; Europe and Wider World. The winners will be announced at the very high profile awards ceremony, which is always held on the eve of the annual tourism event in London ‘World Travel Market’ on November 4th. The British Travel Writers Guild Awards provide the first opportunity for around 340 ambassadors, ministers of state, travel & tourism CEOs and their top executives, PRs and key travel editors, journalists and bloggers, to get together and network as they arrive in London for the global tourism event.

The Ocean Race and Ocean Bottle team up to ta...