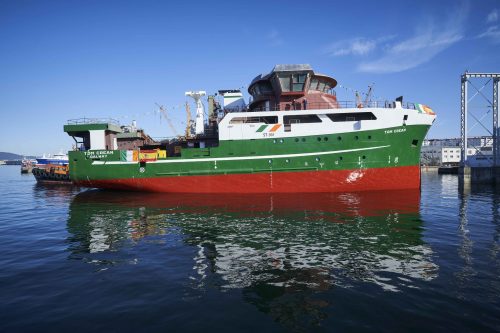 The launch of the hull is a significant milestone in the build process, with the vessel on schedule to be completed in summer 2022. The build of the RV Tom Crean received funding of €25 million from the Department of Agriculture, Food and the Marine, as approved by the Government of Ireland.

Minister for Agriculture, Food and the Marine, Charlie McConalogue T.D, said, “I am pleased to note the significant progress being made to date on the construction of Ireland’s new marine research vessel, RV Tom Crean, and welcome this significant milestone in the construction project. This new research vessel, when delivered in 2022, will be an important infrastructural tool in acquiring data and information supporting the sustainable management and development of Ireland’s valuable marine resource. The vessel will support key national and international programmes in fish stock assessment, climate change related research, environmental monitoring, seabed mapping and marine spatial planning, supporting the implementation of the Common Fisheries Policy and delivery of the National Marine Planning Framework and other important marine related activities.”

His Excellency Frank Smyth, Ambassador of Ireland to Spain and Andorra, joined Marine Institute Chairman Dr John Killeen and Interim CEO Michael Gillooly to view the hull of the 52.8 metre vessel glide into the water.

Michael Gillooly, Interim CEO of the Marine Institute said, “It is remarkableto see the launch of the hull of the RV Tom Crean today, which marks an important stage in the construction of this modern, multipurpose vessel. It will carry out a wide range of marine research activities including expanded fisheries surveys, seabed mapping and marine spatial planning, climate change related research, environmental monitoring, deep water surveys, and support increased research in the Atlantic Ocean. The RV Tom Crean will enable the Marine Institute to continue to lead and support vital scientific surveys that contribute to Ireland’s position as a leader in marine science.”

The RV Tom Crean, which will replace the 31 metre RV Celtic Voyager, will provide a year round service, enabling 300 operational days at sea each year, and up to 3,000 scientist days of research per year. The new research vessel will be a silent vessel, capable of operating throughout the Irish Exclusive Economic Zone (EEZ). The RV Tom Crean will be able to go to sea for at least 21 days at a time and is designed to operate in harsh sea conditions.

Based in Galway, the vessel will be used by the Marine Institute, other state agencies and universities to undertake multidisciplinary surveys. It will also maintain and deploy weather buoys, observational infrastructure and our Remotely Operated Vehicle (ROV) Holland I.

Ireland’s new marine research vessel has been named the RV Tom Crean, after the renowned seaman and explorer who undertook three major ground breaking expeditions to the Antarctic in the early years of the 20th Century; which sought to increase scientific knowledge and to explore unreached areas of the world, at that time.

Spanish shipyard Astilleros Armon Vigo S.A. were awarded the contract to build Ireland’s new state-of-the-art marine research vessel in 2019, following the completion of the design by Norwegian ship design consultants Skipsteknisk AS. The construction of the new national research vessel continues on schedule and on budget in 2021.