Majestic marathon that is Tóchar Phádraig 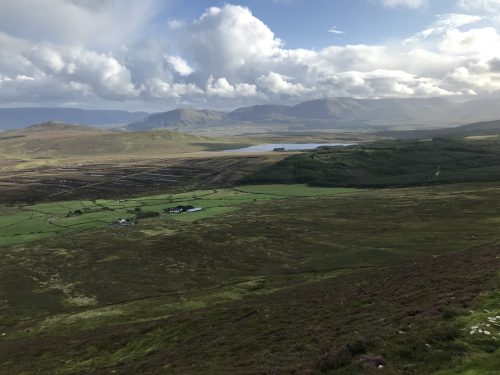 Saturday 30 August 2019. For those that may have the desire to walk the Camino but don’t have the time or commitment to take on the ancient pilgrim path on the Iberia Peninsula, there is a similar one-day opportunity right in the heart of Mayo that is thousands of years old with little change into the modern era. Tóchar  Phádraig, is a 42km pathway through the county from Ballintubber Abbey to Croagh Patrick. In following the footsteps of St. Patrick from the fifth century, it’s a real test for mind and body yet providing a wonderful realization that the pain barrier can be overcome with strong will and encouragement from fellow travelers.

Originally it was a chariot road that went from Rathcruachan, the seat of the Kings and Queens of Connacht to Aughagower and Cruachan Aille, as Croagh Patrick was called in Pre-Christian times. After St. Patrick’s time, as pilgrims began to transverse that same road, it became known as Tóchar Phádraig or St. Patrick’s Causeway. The last documented evidence of its use as a pathway was in 1588, to when Bingham, High Sheriff of Mayo, sent his troops along the Tóchar in search of fugitives from the Spanish Armada. In Penal Times, the journey was made secretly.

Just over 80 participants gathered at the 9th century Abbey, familiar to most people in recent decades for celebrity weddings and as customary, warmly greeted by the effervescent Fr. Frank Fahy, who had a major hand in restoring the original pathway with the cooperation of land owners along the route. Assembled inside the churches’ white painted stone walls with its high beam glorious gothic arches, the eager pilgrims of all ages, were given a short explanation of the ten-hour task ahead and the significance of same. Due to the inclement weather forecast, all of the participants were well togged out with rain gear, embellished by the wearing of complimentary Hi-Viz sleeveless jacket, required for time spent on the tarmacked roads. Some were first-timers while others were well equipped with trekking poles or humble sticks for the trip, advantageous when encountering the ever-changing terrain. It is a religious pilgrimage in its own right rather than a tourist type day out, while participants are not obliged to undertake the rituals involved, certain elements of reverence are required. Unlike the Lough Derg pilgrimage in Donegal, where one prays with their feet, the Tóchar’s pray with their feet, knees and hips. Not to mention that it may help to get that six-pack back into shape!

After lighting the symbolistic candle before departure, five separate groups set off from the back of the Abbey, which still has remnants of the Danchóra, or Bath of Righteous, from the 13th century to when a hostel was established here. Threading through soft grassy, marshy fields, the enthusiastic collective progressed onto well-worn gravel paths while climbing over man-made styles or stepways bordering field to field. Due to the persistent downpours the day and night before some of the route was impassable due to flooding with one considerate farmer alerting Fr. Fahy before setting off, about the situation on his land, which was good of him. Livestock, mostly cattle and sheep took little notice of the passerbys, probably well used of the large numbers of brightly colored walkers due to the frequency of the Tóchar five time a year.

Along the route, interesting historical markers are posted noting evidence of past times relevant to the actual locations. Probably the most significant is the Boheh Stone, a large oval spread of hard rock that bears one of the finest collections of rock art in Ireland. There are over 260 geometric motifs carved all-round the huge mound. First discovered in 1871, it is known locally as St. Patrick’s Chair. Mass was celebrated here by Fr. Frank.

Typical of the Irish Summer, as it comes near its seasonal end, we were greeted along the way with bright sunshine with squally showers, one of which came around the Round Tower at Aughagower as we were having a lunch break. Legend has it that the round tower’s capstone was struck by lightning, and landed half a mile away on the hill of Tavenish. A local woman is said to have carried the heavy cap stone in her apron to the church, where it still remains. We could have done with the same apron to protect us from the deluge!

Support cars provided by Abbey staff ensured that we were refreshed with water and treats and helped take the burden of carrying heavy rucksacks from point to point.

Many found the road kilometers, often hilly, more arduous and boring compared to the spongy underfoot experienced in the early part of the trek. As we progressed the ‘holy grail’ was in sight, that is The Reek as Croagh Patrick is also nationally known. Only five volunteers did complete the ultimate challenge of climbing to the peak rather than to the plateau section the remainder arrived upon, just before the ‘cone’ summit. Going to the top wasn’t encouraged as the organizers were conscious of the bus waiting time at the base to transfer the people back to Ballintubber.

Following a not so pleasant and lengthy road section a sharp right turn in the direction of the mountain was taken on to a difficult ascent through wet grasslands steaming from the hillsides. There was an actual narrow gravel pathway mixed with protruding rocks that provided appreciated added grip as the leg muscles were losing their strength. Stamina at its limit was required here. Just when one thought that the peak was within view, another hillock would appear before the descent could begin and other leg muscles could go into overload. As we have learned over the past decades, the march down from the summit is dangerous and sure-footedness is paramount. At times the movements of some of those coming down resembled zombies, others feeling like them, as their minds seemed to disconnect from below the torso! Out of body experiences were sensed by others! Loose rocks and slippery gravel required one to take the journey down cautiously and sometimes with no clear end in sight, the weakness of the tired mind and body had begun to take its toll. Then, thanks to clear skies, the spectacular view over Clew Bay and its many islands together with some long deep breathes of fresh Wild Atlantic Way air brought some impetus back to the proceedings, providing enough oxygen to carry on for the remainder. At this stage the 80 plus pilgrims (which had been reduced by two) were well spread out before the finish line. Here, the feeling of relief was palatable allied to the emergence of aches and pains from every moving body part, once the muscle actions ceased. But as Fr. Frank stressed: “We don’t want to hear anyone complaining, advising to hold their tongue and say Thanks be to God instead.” Well, I’m sure there were many like myself biting their tongue throughout the day, holding off the inevitable verbals! Just occurred to me at the end while waiting for the bus, we had completed the required distance for a marathon. “Thanks be to God”. 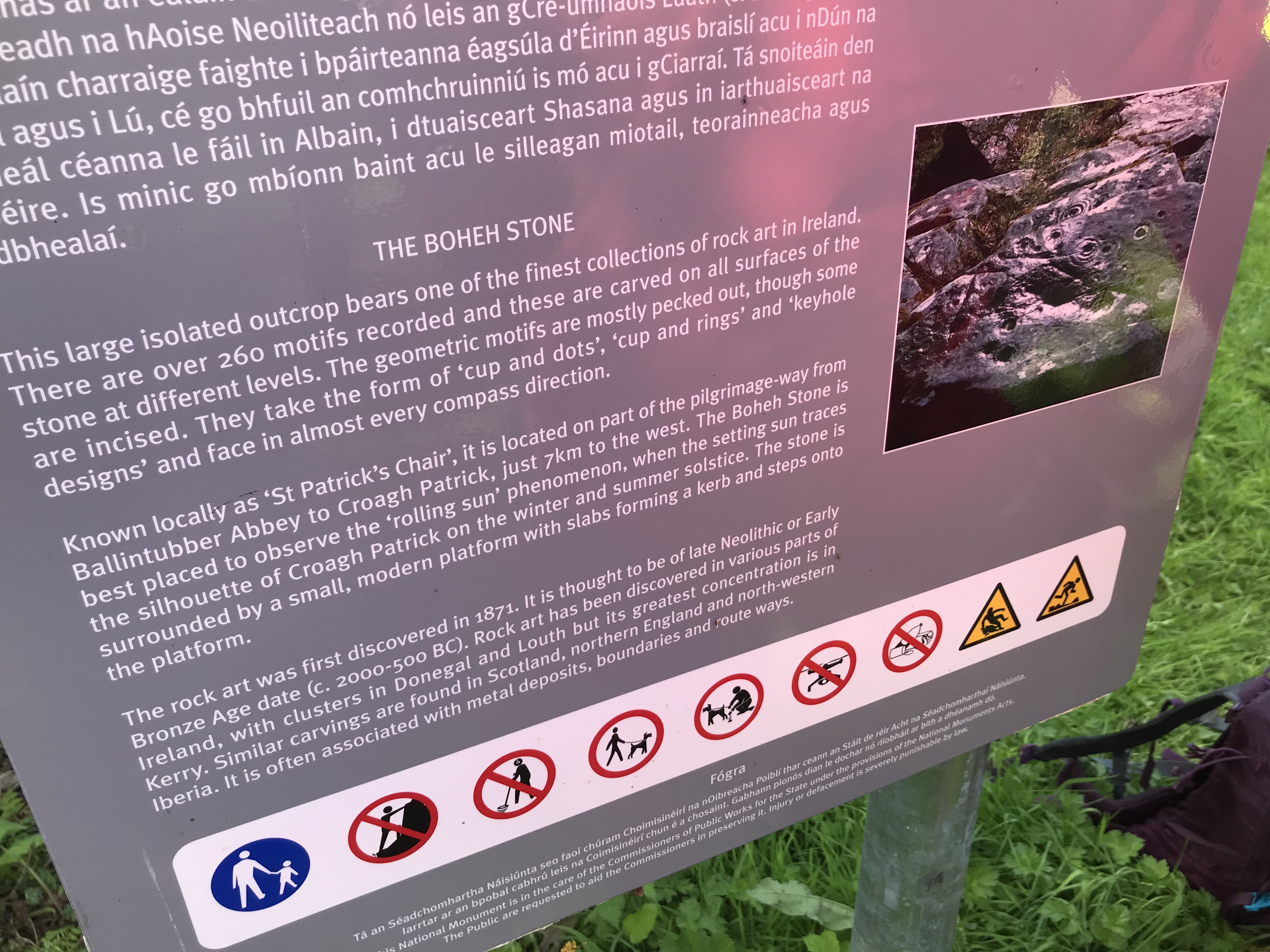