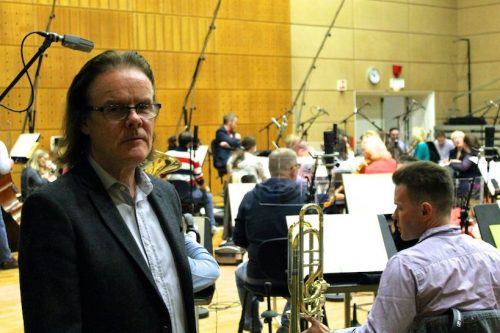 Announcing the inaugural Patrick Cassidy Summer School 2022 to be held at the McWilliam Park Hotel, Claremorris, County Mayo from 29-30 April, 2022, commencing with a tribute concert and a series of workshops based on the theme: The Inside Track on Composing Music in Movies, Theatre & Stage.

The concept evolved from Patrick Cassidy’s return to his hometown of Claremorris with the RTE Concert Orchestra to perform one of his works, Famine Remembrance to commemorate the centenary of Claremorris Parish Church in 2012. The European Premiere of this composition was extremely well received by the attendees and the press which collectively acknowledged this fine masterpiece from Patrick’s ensemble built up over the years.  Since Patrick’s move to Los Angeles after making a name for himself with renowned Irish themed works such as Deirdre of the Sorrows and Children of Lir, his career progressed to writing musical scores for such high-profile movies as Hannibal, Kingdom of Heaven and with Calvary, which was filmed on location in Easkey, County Sligo. He also composed the score for the RTE TV series ‘1916 – The Irish Rebellion’.

“Through regular contact, we came up with the idea of establishing a Summer School dedicated to the subject of music in film and stage.  We see a huge opportunity to attract young talented music composers into the world of film and theatre by hosting presentations, workshops and recitals from some of the top stars and representatives in the business.  With this inaugural event in mind, we have an interesting and entertaining programme planned with a blend of performances and workshops over the beginning of the May Public Holiday weekend, held at the McWilliam Park Hotel, Claremorris,” explained Jarlath Sweeney, on behalf of the organising committee.

Theme: The Inside Track on Composing Music in Movies, Theatre & Stage

A unique opportunity to learn how modern composition for film and stage is undertaken, with full explanation on how the business works.

Local Schools, Schools of Music nationwide, and University students of music, Choral & Musical groups, plus music lovers and fans of Patrick Cassidy and his compositions.

The Patrick Cassidy Summer School 2022, in association with Home to Mayo, DeCare, Claremorris Credit Union, Martins Coaches (Limerick), Touchstore & the McWilliam Park Hotel, will commence with a recital of Patrick Cassidy works by the Limerick School of Music Orchestra, the Maynooth Chamber Choir, Music Generation Mayo Harp Ensemble, and Harry Carpendale, with Anne-Marie Gibbons and David Lynn joining in. The performances will take place on Friday 29 April in Claremorris at the McWilliam Park Hotel. This will be a ticket only event and available to purchase on line. Tickets: €25 on sale through: www.claremorrischamber.ie and/or  www.patrickcassidy.com

On Saturday 30 April, the organisers will host a series of themed Workshops at the McWilliam Park Hotel with presentations by Patrick Cassidy and Michael Dawson.  The workshops will focus on music and song composition, commissioning, and practical advice on the business end of the industry. Admission is free but registration is required through through: www.claremorrischamber.ie and/or  www.patrickcassidy.com

Renowned Irish composer, Patrick Cassidy was born in Claremorris, Co. Mayo in 1956.  He came into prominence with the release of the ‘Children of Lir’ (the setting of the great legend), the first major symphonic work written in the Irish language. Recorded by the London Symphony Orchestra and the Tallis Choir, it remained at number one in the Irish Classical Charts for over a year.

He has worked in many various formats, including TV, opera, and film. His Aria Vide Cor Meum, commissioned by Han Zimmer, featured in the films Hannibal (2001) and Kingdom of Heaven (2005). Patrick is best known for his Narrative Cantatas – works he has written for Orchestra and Choir based on Irish Mythology.

The Cassidy family lived on Convent Road in Claremorris and his late father Colm, and mother Kathleen operated a Chemist shop on Dalton Street in the town. Patrick received a Degree in Applied Mathematics from Limerick University, and supported his early compositional activities with a day job as a statistician.

‘Famine Remembrance’, a commissioned piece to commemorate the 150th anniversary of the Irish Famine was premiered in St. Patrick’s Cathedral, New York in 1996. A recording of the piece was released the following year. The European premiere held in Claremorris, Co. Mayo in April 2012.

Other albums include ‘Cruit’, arrangements of 17th and 18th century Irish harp music with Cassidy as the soloist and ‘Deirdre of the Sorrows’, another Cantata in the Irish language recorded with The London Symphony Orchestra and The Tallis Choir.

In 2004 ‘Immortal Memory’ was released; a collaboration between Cassidy and Lisa Gerrard who won a Golden Globe for ‘Gladiator’.

Cassidy lives in Los Angeles where in addition to his concert work, he has scored and collaborated on films and documentaries. Notable credits include Hannibal, Veronica Guerin, Confessions of a Burning Man, Salem’s Lot, King Arthur, Layer Cake, Che Guevara, Ashes and Snow, Kingdom of Heaven, The Front Line.

The aria Cassidy wrote for Hannibal, ‘Vide Cor Meum’, is the only piece by a living composer on Warner Classics 2006 compilation ’40 Most Beautiful Arias’. It now features on many classical collections and performed by such luminaries as Katherine Jenkins and Sarah Brightman.

In June 2007 ‘Famine Remembrance’ will be performed at the opening of Toronto’s Ireland Park with the President of Ireland as special guest.

The Eligy from his Immortal Memory album featured in the Trailer for the Hollywood blockbuster – “Superman: Man of Steel”.

Patrick was bestowed with the decoration of ‘Cavaliere’ (Knight) in the Order ‘Stella d’Italia’ by the Italian Government for his new opera Dante, celebrating the life of the great Italian philosopher and poet.

Patrick Cassidy most recent work a new setting of “The Mass” is an historic undertaking in the world of modern classical composition, communicating the aspirations of our time, our place and our culture in an unbroken musical tradition which has spanned a thousand years.

*Patrick is available for interview by request

Brittany Ferries bookings, in and out of both...
Brittany Ferries to introduce Galicia on Rosslare to Bilbao route, boosting service for holidaymakers Wellhouse Leisure marks its 1,000th Ford campervan; Introduces 2022 Ford Misano 4