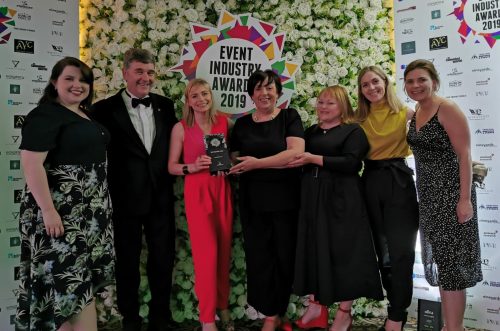 The award was announced at a gala awards ceremony on Friday 19th July held at Citywest Hotel, Dublin. The Event Industry Awards celebrate excellence and showcase the very highest standards in Ireland’s event industry. SeaFest was nominated alongside some of Ireland’s most outstanding events and festivals.

This is the second year in a row that SeaFest has scooped the award. SeaFest was described by judges as “A bustling and action-packed weekend celebration. Seafest 2018 was full of life and provided fun and entertainment for people of all ages. Our panel were impressed by all the carefully planned efforts made to source quality exhibitors and also felt that the organisation throughout the festival, from security to live shows, was exemplary.”

A relative new-comer to the festival scene in Ireland, SeaFest has witnessed phenomenal growth in a short number of years, having grown from 10,000 visitors in its first showing in 2015, to attracting over 100,000 in 2017 and 2018. SeaFest celebrates and showcases the many ways our seas and oceans enrich our lives. The three day festival combines a host of entertaining and educational activities on and around the water. From tours of ocean-going vessels, inspiring talks and interactive educational activities, celebrity chefs and free sailing, the festival offers a host of fun, free activities for all ages.

Speaking about the award, Sinéad Coyne, Communications Manager for the Marine Institute and SeaFest 2018 said: “We are delighted and honoured that SeaFest 2018 has won the accolade of ‘Best Cultural Event’ at this year’s Event Industry Awards. SeaFest is now regarded as one of the biggest and most successful festivals of its kind in Europe. This would not have been possible without the huge support from a wide range of local, regional and national agencies who came together to plan and stage this largescale event. Thanks also to our festival organiser Arcana, our suppliers and to the media who have shown great support for SeaFest, year on year. Also a big thanks to our volunteers, and the people and businesses of Galway – we couldn’t have done it without you.”

SeaFest 2018 was held in Galway Harbour, and attracted 103,416 festival-goers and generated €6.5 million for the city’s tourism industry. Global event specialists, Arcana, were appointed event managers for SeaFest 2018 and worked with the Marine Institute and 16 local, regional and national organisations and agencies to stage the three-day festival.

This year, SeaFest 2019 was held in the Port of Cork in Cork City from 7th to 9th June, and included over 100 free events celebrating our oceans. The festival included a performance from world-famous tightrope walker Christopher Bullzini, seafood cookery demonstrations from celebrity chefs, vessel tours, Defence Force displays, sailing and kayaking trips, and talks from wildlife cameraman Doug Allan. Cork City Council and the Inter-Departmental Marine Coordination Group (MCG) will present SeaFest again in 2020 and 2021.