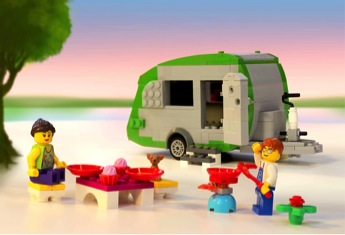 To celebrate 130 years of leisure caravanning this year, the team behind the national Motorhome & Caravan Show is aiming for a new Guinness World Record by building the largest ever touring caravan made entirely1 of LEGO bricks.

Requiring more than 150,000 individual interlocking plastic LEGO bricks, the life-size model caravan will be completed and officially unveiled to the world on Tuesday 13th October – the opening day of the Motorhome & Caravan Show 2015 at the NEC, Birmingham. It will feature a full interior, with working electric lights, sink, simulated cooking facilities, bed and seating enabling people to get inside. A special guest will lay the final LEGO bricks on opening morning.

A team of eight professional LEGO brick builders will take more than 1,000 man hours to build the model, which will be based on a modern, T@B 320 RS ‘teardrop’ caravan. When unveiled at the Motorhome & Caravan Show the LEGO brick model will sit side-by-side with a real T@B 320 RS caravan as part of a feature area in Hall 12.

In line with the Guinness World Record attempt, the project build will be filmed and photographed from start to finish, with regular updates posted on the Motorhome & Caravan Show website and on social media using the hashtag #legocaravan.

“People of all ages are fans of LEGO, and the same goes for caravanning, it appeals to both young and old alike and creates memories that last forever. Leisure caravanning has such a strong 130 year heritage and it continues to be popular, with more than 50 million nights spent in caravans in the UK, and a £6 billion a year contribution to the economy, each year.

“The Show will be the first place to see our LEGO brick caravan and we believe it will be a fantastic attraction for our visitors as something like this has never been done before anywhere in the world.”

“The LEGO brick caravan will go on to support the Freedom to Go campaign, which is all about bringing new people into the caravan market and challenging perceptions they may have.”

Not only is the Motorhome & Caravan Show 2015 the place to see the LEGO brick caravan debut, it’s also where all the new 2016 caravan and motorhome models from leading UK and European manufacturers are revealed under one roof.

The show is supported by The Caravan Club and The Camping and Caravanning Club, fills 11 huge halls at the NEC in Birmingham and features every type of leisure vehicle, including caravans, motorhomes, campervans, trailer tents and folding caravans, luxury lodges and caravan holiday homes.