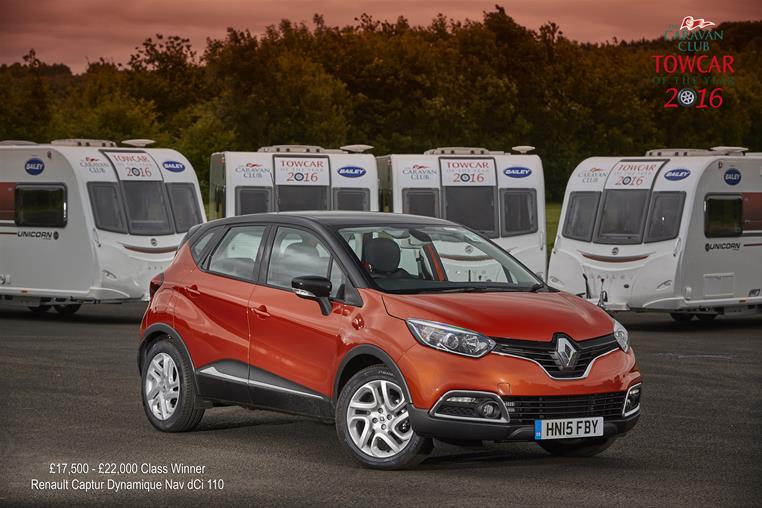 The Captur, in Dynamique Nav dCi 110 guise, beat five competitors to secure the win having been put through its paces to test true ‘caravanability’. The judging criteria included value for money, load capacity and suitability for accommodating caravan paraphernalia, how easily it could be hooked up to a caravan and the quality of towing information contained in its handbook.

Commenting on the Captur’s practicality as a caravanning vehicle, the judges commented: “It was great to see such a diverse variety of vehicles entered into the competition this year. There is a vehicle choice for everyone’s needs, whether you tow a small trailer tent or a large twin-axle caravan. On behalf of The Caravan Club, our congratulations go to all the winners and a special mention must go to the Renault Captur, which showed that light weight, economical cars can make great towcars!”

Sophie Richard, Product Manager, Renault UK, said: “Captur comes as standard with a number of practical storage and convenience features and with the optional Touring Pack fitted, the compact crossover is an accomplished and affordable caravanning vehicle. We’re delighted with this award and that the judges at The Caravan Club have recognised Captur for its towing and touring abilities.”

Captur is available with an optional Touring Pack comprising of a quick release tow-bar, luggage boot net and front centre armrest. Priced at £550, it turns the practical compact crossover into a convenient and comfortable towing and touring vehicle.

Seven expert driving judges evaluated the Captur for its dynamic abilities and ergonomic qualities, with a test route including tight and twisty ‘country lanes’, 17 per cent hill stops and starts, circuits of a high-speed bowl and reversing tests over a four day test programme.

The Captur is currently Europe’s best-selling compact crossover and has sold over 416,000 examples worldwide since it was launched in 2013.

Priced from £14,295 the Captur is available in four trim levels with a choice of two petrol and two diesel engines, with CO2 emissions as low as 95g/km and combined cycle fuel economy of up to 78.5mpg. The award-winning Dynamique Nav dCi 110 version can tow up to 900kg (braked) and its 110hp 1.5-litre turbodiesel engine has CO2 emissions of 98g/km, placing it in VED Band A, and combined cycle fuel economy of 76.4mpg. It is priced at £17,695 and comes with a comprehensive specification including 17-inch alloy wheels, handsfree keycard, climate control, 7-inch touchscreen satellite navigation and cornering headlights.