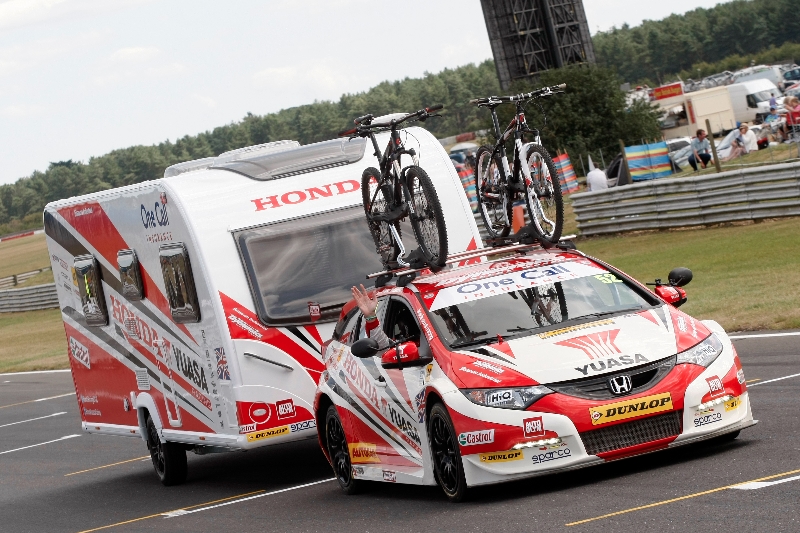 After its summer tour of the UK’s race circuits, the hugely popular and unique Honda Yuasa Racing Caravan is set to take centre stage at the Motorhome & Caravan Show next week.

Having most recently wowed fans at the Silverstone BTCC race meeting, the caravan is already en route for its next destination – the NEC Arena in Birmingham. The Show will run from 14-19 October and will be officially opened by former F1 World Champion and keen caravanner Nigel Mansell, alongside TV journalist Fiona Bruce.

At the UK’s biggest and most exciting motorhome and caravan exhibition, the leading British and European manufacturers and dealers will be displaying brand new models, hot off the production line.

Ready to pitch up with over 100 of these innovative leisure vehicles, the Honda caravan – a Bailey Pursuit 550-4 painted in Honda Yuasa Racing colours – is guaranteed to be a star turn amongst caravan and motoring fans alike. Along its journey, the caravan has picked up some real traction, even being named by MSN as ‘One of the World’s Coolest Caravans’.

Liveried in Honda’s distinctive red-and-white racing colours, the caravan began its nationwide tour at the beginning of August, when Honda BTCC team-mates Gordon Shedden and Matt Neal arrived at Snetterton racetrack with the caravan in tow.

It has been on the road ever since, along with its trusty tow car, the new Honda Civic Tourer. The Civic Tourer will also be on display at the Motorhome & Caravan Show, offering crowds the chance to discover its towing capabilities and practicality as a family vehicle.

Volkswagen Commercial Vehicles’ new Multiva...
Something for everyone on the Bailey stand at the NEC! Boo! Spooktacular Halloween Fest Comes to Powerscourt Estate