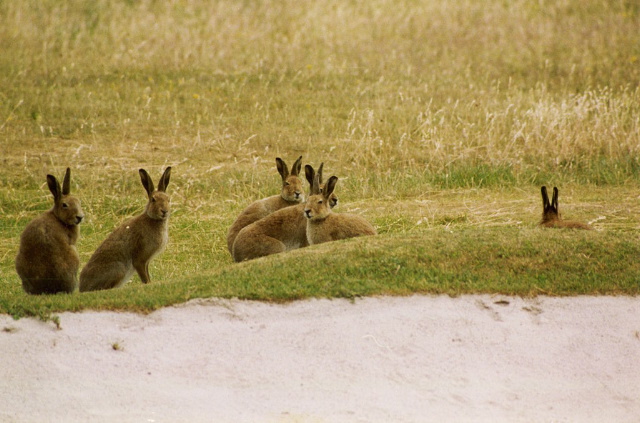 The Irish hare Lepus timidus hibernicus is an endemic sub-species of the arctic hare. Unlike its continental cousins, which are restricted to high mountains and Arctic tundra, Irish hares are found from sea level right up to the tops of the highest Irish mountains. Sadly, this species is threatened by agricultural intensification and competition with the introduced brown hare Lepus europaeus, which is found in mid-Ulster.

March is the mating season of hares when “mad March hares” are often seen boxing each other. Contrary to popular belief, the fighting is not typically of males fighting over the opportunity to fight over a female but is in fact females fighting off the advances of unwanted males.

The Irish Wildlife Trust is launching our “Mad March Hare Video Competition” for the month of March to help promote this charismatic species and the threats it faces to the Irish public.

To take part in our campaign, we would like you to do two things:

2: Submit sightings of rabbits and hares (Brown or Irish) to the Atlas of Mammals in Ireland run by the National Biodiversity Data Centre. Records can be submitted online at http://mammals.biodiversityireland.ie/ or by downloading the Irish Land Mammals App, which is available on android smart phones.

Alternatively you can email us your sightings (preferably with photos) at iwtmadmarchhare@gmail.com

The person with the best video of boxing hares will be awarded a copy of “Mammals of the British Isles: Handbook”, kindly donated by the Mammal Society, and our Mad March Hare Certificate. ENDS