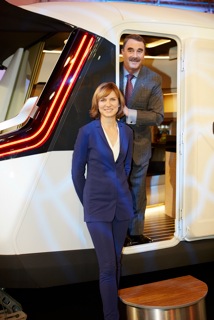 In front of a capacity crowd Nigel also opened the Experts’ Theatre and amused the audience with recollections of his family caravanning holidays and motor racing career, as well as offering his top towing tips.

World renowned for his car racing exploits, Nigel, who is a passionate caravanner, revealed at the Show that he has also owned a number of motorhomes over the years. He said:“I’ve caravanned for near on 60 years, and still do today visiting Tal y Bont in Wales. I have also owned a number of motorhomes, in which my wife and I have travelled the UK.”

More than 400 exhibitors, including all the major UK and European manufacturers, are at the show, which runs from Tuesday 14th – Sunday 19th October. Millions of pounds worth of sales are expected over the six days.

Nigel is the only driver in history to win both the Formula One and the Indy Car World Series in successive seasons. He added: “My family and I enjoy the freedom that comes with caravanning, and getting away from the hustle and bustle of everyday life.

“It’s amazing to see how far the industry has developed in recent years, there are some great looking vehicles out there that are more technologically advanced than ever. I’m delighted to have opened the show.”

Following the motorsport theme, British touring car driver Matt Neale will be at the show tomorrow (Wednesday) on the Bailey stand (19.29), where his Honda Civic touring car is on show with a matching Bailey Pursuit 550-4 caravan.

Well known for her love of the outdoors, The Camping and Caravanning Club President, Julia Bradbury, will also be at the Show on ‘Friendly Friday’ – Friday 17th October, (stand 8.10).

The Motorhome & Caravan Show is the UK’s only national event for the motorhome and caravan industry where all the major manufacturers launch exciting new 2015 models hot off the production line. The Show fills 11 giant halls at the NEC – in 2013 more than 100,000 people from across the UK visited.

This year hundreds of products will be on sale, many at show only prices, for people to buy and browse, including caravans, motorhomes, campervans, trailer tents and folding caravans, luxury lodges and caravan holiday homes, not to mention thousands of outdoor accessories, gadgets and campsite and destination ideas.

On-the-door tickets cost ￡9 for Seniors (60 years +) and ￡10 for Adults, with children 15 years and under admitted free. All tickets include parking and a Show Guide(subject to availability).