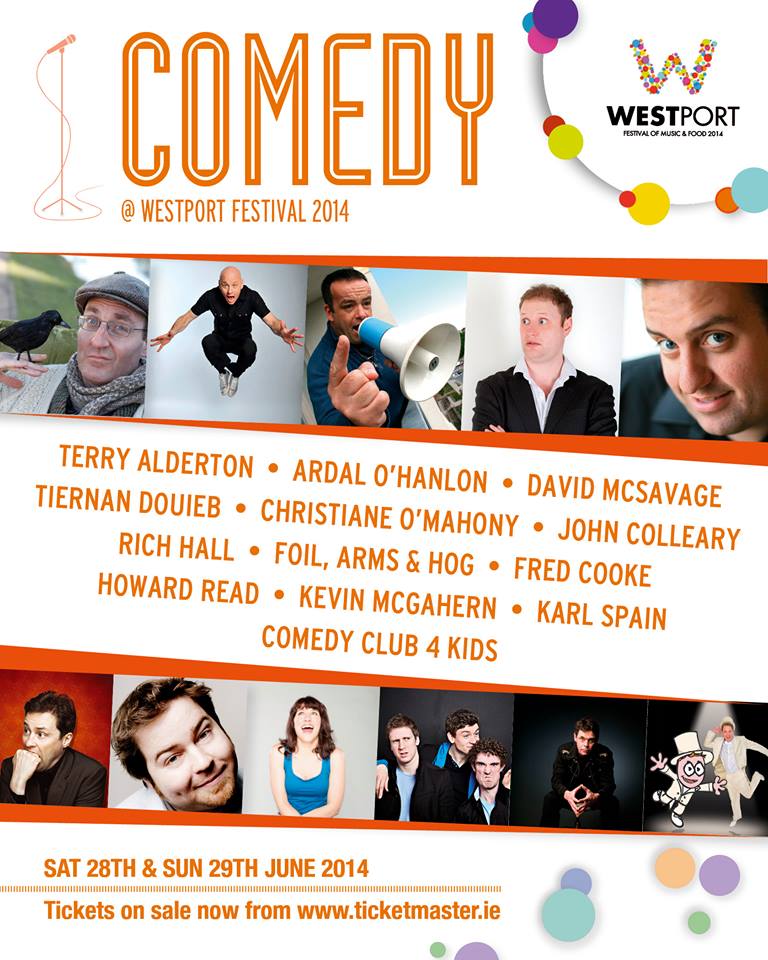 David McSavage is one of Ireland’s most popular comedians and street entertainers.  David devised, wrote and starred in the three times IFTA nominated TV series The Savage Eye for RTÉ.  His cutting commentary and performances cover all aspects of life and nothing is safe from his truth induced interpretations.  From The Barman (Mick The Bull) to Father Finnegan to former President Mary Robinson and Pat Kenny, audiences relate to each character from the many aspects of Irish life.  A regular guest on TV and radio shows in Ireland for many years, David has also appeared at all the major comedy festivals including the Edinburgh Festival and internationally in Australia, Germany, Japan and Scandinavia.    In April 2014, David will appear in the film ‘Calvary’ opposite Brendan Gleeson; written and directed by John McDonagh (‘The Guard)’. Other film credits include ‘Dental Breakdown’ directed by Ian Power, Gold directed by Niall Heary. ‘Our Robots Overlords’ directed by Jon Wright is currently in post-production and will be released in late 2014.

Kevin McGahern presents satirical TV review and magazine programme Republic of Telly and is best known for his role as ‘Sim Card’ on RTÉ’s Hardy Bucks.  Kevin is also an actor and has appeared in Flat Lake (2013), The Gloaming (2013) and Portrait of a Zombie as well as television adverts for Three Ireland.

John Colleary is star and co-writer of The Savage Eye.  His credits include appearances on Stand And Deliver and The Panel on RTE Two as well as being the writer/performer of popular slot Last Orders on Today FM’s Last Word.   John was voted sixth best comedian in Europe by Bail Out Monthly Magazine.

Christiane O’Mahony has been performing stand up and musical comedy for two years, in that time she has toured as part of Des Bishop’s show  ‘Des Bishop likes to Bang’, which involved performing to 15,000 people throughout Ireland and the UK at venues including Vicar Street, Cork Opera House, Millennium Forum and Wexford Opera House, the Edinburgh Festival and several Best of the Fest gigs in Edinburgh, Top Secret Comedy Club London, International Comedy Club Dublin, the Laughter Lounge Dublin, Roisin Dubh in Galway and at the Stand in Edinburgh and Glasgow.  She won the audience vote in Show Me the Funny, was a semi-finalist in Funny Women UK and UK Musical Comedy Awards.

Fred Cooke has rapidly become a unique stand-up delivering a style of comedy that simply cannot be imitated.   Fred has already contributed to a variety of successful Irish TV shows, both as a writer and performer, including RTE’s Republic of Telly, The Cafe(as The Crazy Chef), Watch Your Language (The Mad Professor), The Savage Eye, The Modest Adventures of David O’Doherty, and The Liffey Laughs.  He has also regularly been the warm-up act for many different television chat shows including The Late Late Show and The Podge & Rodge Show.  He even played the main role as Fergus in a series of recent Spar ads – seen as one of the country’s most successful advertising campaigns of the last ten years.   Fred has frequently been invited to perform at the largest and most successful festivals both here and abroad, including the Cat Laughs Comedy Festival, the Carlsberg Comedy Carnival and the Edinburgh Fringe Festival.

Rich Hall – Part Cherokee, part cranky Southerner, part country singer. Rich is probably best known around these here parts for his appearances on Channel 4’s “Stand Up For The Week” and as an outstanding guest on Q.I., Have I Got News For You, and Never mind The Buzzcocks. Oh yeah, in 2000, he won the Perrier Comedy Award at the Edinburgh Fringe, in the guise of his own grizzled uncle, Otis Lee Crenshaw, the much-convicted country music singer.   A grouchy deadpan comedy genius who looks like a Pearl Jam roadie, Rich is a master of absurdist irony. He’s widely believed to be the inspiration for Simpson’s character Moe Syzlak.

Terry Alderton  is an English comedian who had acting and presenting roles in the early 2000s before returning to stand-up comedy a decade later.   In 1999, Alderton was nominated for the Perrier Comedy Award.   Alderton went on to present the National Lottery show Red Alert with Lulu later that year.   He has hosted The Joy of Text with Ulrika Jonsson, presented his own show on Capital Radio called Terry’s Turnstiles and has appeared on the Comedy Central show Comedy Store.   Alderton worked as an actor in the final series London’s Burning and he made his West End London début when he performed his one man show at the Bloomsbury Theatre in May 2010.  In 2013, he joined the cast of EastEnders as cockney cab driver Terry Spraggan.

Ardal O’Hanlon has consistently proven himself to be one of Ireland’s greatest living comedians since he won the Hackney Empire New Act Of The Year Award back in 1994. He is a multi-awarding winning comedian, and one of the most acclaimed stand-up comedians to emerge from the comedy scene in recent years.  As Father Dougal in C4’s ‘Father Ted’, Ardal has reached cult status.  The show was acclaimed as the funniest program of its time, this being confirmed by winning a BAFTA for the Best Comedy Series while Ardal was nominated for Best Comedy Performance.

Ardal starred in the ITV drama series ‘Big Bad World’ as ‘Earnon’ and was the lead in the BBC comedy series, ‘My Hero’.  Film roles include the lead in the USA feature ‘Another Bobby O’Hara Story’, Neil Jordan’s ‘The Butcher Boy’, ‘Moll Flanders’ and lead in the award winning short feature, ‘Flying Saucer Rock ‘n’ Roll’.  In addition to presenting ‘The Stand Up Show’ on BBC, Ardal has written a best-selling novel, the ‘Talk of The Town’ and is currently writing a second novel.

Karl Spain is an Irish stand-up comedian who has performed all over the world. He is not just a comedian though you may recognise him from such things as “The Lover’s Guide” or the Music video “Thong Song” from Sisqo.   His laid back story telling style covers so many topics and his Improvisational ability is legendary.  He began his onstage life as part of a break dance roller skate troupe and then followed the natural progression to stand up. He also on account of his rather feminine legs was a model for “Pretty Polly”.  He spends all the money he makes on subutteo and comics and will be delighted to see you in one of his audiences as you are his favourite.

Foil Arms & Hog
Foil Arms and Hog are Ireland’s top comedy sketch group.  Called ‘Pure Brilliant’ by Tommy Tiernan, the group have starred on RTÉ’s The Savage Eye, have over 4 million hits on YouTube and sold out the Edinburgh comedy festival five years running. In 2014, they embark on a World Tour taking in Chicago, San Francisco, LA and Adelaide and culminating in a show at Dublin’s Vicar Street. Their act is a unique blend of sketch comedy and stand-up with wickedly twisted characters, unpredictable scenes and high energy performances. Not to be missed at the Westport Festival of Music & Food. Check out www.foilarmsandhog.ie

Comedy Club 4 Kids
The Comedy Club 4 Kids began at the Edinburgh Fringe Festival in 2006 and has been going from strength to strength ever since.  After the sell-out show in Edinburgh, the show was brought to the Menier Chocolate Factory, where they started running workshops for kids followed by a show some of them could perform in, and all of them would want to watch.  After residences in the Arts Theatre and the Comedy Store, they moved to the Soho Theatre in 2008, which remains their London home. From the London base, which is a lot less sinister than one in a disused volcano, we also go off around the country to do shows for them too, appearing in theatres and at festivals all over the UK and Ireland.

Howard Read
Howard’s (Big) multi-award-winning live animation shows for children have been wowing families for six years now.  Beit the 3D spectacle of Little Howard And The Magic Pencil Of Life And Death or the amazing live interaction and slap-stick mayhem of Little Howard’s Big Show For Kids. Howard’s family stage shows have all the wit, stupidity and chaos of his much loved CBBC series Little Howard’s Big Question.  Big Howard and Little Howard have also appeared on The Royal Variety Performance, This Morning and TV shows on three continents.

Tiernan Douieb (pronounced ‘Eee-Waaaah Crunk’) is one of those people who you’ve heard about with beards.   As well as the full time job of beard wearing, Tiernan also does stand-up comedy for adults and children, writing for things like televisions, articles and post-it notes to remember milk, and he tweets more often than a bird doing the dawn chorus on Groundhog Day.