See a range of new VW T6 campervan conversions all under one roof! 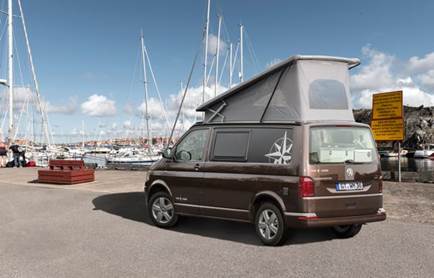 The UK’s national leisure vehicle launch event opens this autumn, the Motorhome & Caravan Show 13 – 18 October at the NEC, Birmingham, featuring a selection of Volkswagen sixth generation Transporter (VW T6) campervan conversions to view together for the first time. Four exhibitors have confirmed they will have VW T6 conversions at the show, including the original VW campervan converter Westfailia GMBH which will debut its new T6 Club Joker City on UK shores. Advance tickets to the event are on sale now from as little as £7.50* via motorhomeandcaravanshow.co.uk.

Concept Multi-Car Ltd (Stand 11,145) will launch its all new conversion for the VW T6 which is called the Reimo Free Van and expects to have another T6 based model on display.

Nomad Campervans (Stand 11,165) will have its new ‘Ranger’ T6 conversion, unveiling a layout that combines the comfort of saloon car seating with the functionality of a campervan. Taking advantage of the new T6 variable seating layout options of the back passenger area, this new family multi- purpose camper offers seating for 5 on full size seats without the usual compromise of sitting on a 3/4 width rock and roll bed.

Wingamm (Stand 8.08) will have the show’s only T6 coachbuilt conversion, with the new T6 Micro on show in the entrances to Hall 9 and 12.

Westfalia Mobil GmbH (Stand 12,160), widely regarded as the original VW campervan converter, will feature its brand new T6 based Club Joker City at the show. It comes with a pop-up roof and will go into production in autumn 2015. This new model is designed to be used ‘365’ days a year as a go anywhere vehicle acting as both daily driver and campervan at a height of under two meters. It comes with a cassette toilet in the rear and the possibility to include a shower. It also features a compressor-type refrigerator as well as a warm water boiler and heating, with innovative sleeping and seating arrangements.

Other exhibitors also expect to feature VW T6 campervan conversions pending delivery of base vehicles into the UK this September. AutoHaus (Stand 12,86) plans on featuring T6 conversions of all its popular models at the show. Danbury Motorcaravans (Stand 12,60) too expects to have a T6 conversion of its popular Surf model. Hillside Leisure (Stand 11,10) plans on featuring a T6 version of its Birchover campervan conversion. Vanworx (Stand 11,160) also hopes to feature a VW T6 converted to campervan specification at the NEC this October.

James Bissett, Marketing Campaign Director for NCC Events, organisers of the Motorhome & Caravan Show, said: “Our event is the UK’s national leisure vehicle launch show and we are really excited to have a selection of VW T6 campervan conversion models making their UK debut as this will be the first place visitors will see them all in one place.

“It’s testament to the industry how fast the leading converters have acted to get hold of the very first VW T6’s coming into the UK and burn the midnight oil to turn them into campervans. It shows the importance of our Motorhome & Caravan Show. Stay tuned to our social media channels and motorhomeandcaravanshow.co.uk for updates.”

The Motorhome & Caravan Show 2015 will be opened by ex-superbike racer and ‘King of the Jungle’ Carl ‘Foggy’ Fogarty and is the first place to see a life-size model caravan made of LEGO® bricks revealed to the world on opening day 13 October. All new 2016 motorhome and caravan models from leading UK and European brands will feature alongside trailer tents, folding caravans, caravan holiday homes and lodges, campsites, tow-cars, awnings and porches.

The show is supported by The Caravan Club and The Camping and Caravanning Club, fills 11 huge halls at the NEC in Birmingham and features every type of leisure vehicle. To buy tickets (in advance from as little as £7.50 senior/8.50 adult*) and for more information;