Something for everyone on the Bailey stand at the NEC! 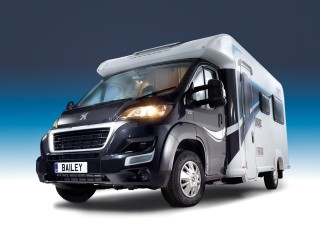 • Bailey stand in Hall 19 (Stand 19-29) at The Motorhome & Caravan Show 2014
• Full range of Bailey touring caravans and motorhomes on display, conveniently arranged by layout, catering for every budget and requirement
• Eight model third-generation Unicorn caravan range, including the Seville – Practical Caravan Magazine’s Tourer of the Year 2015, makes its show debut
• New Approach Autograph 540 and 730 motorhomes to be unveiled for the first time to the public at the exhibition
• Replica British Touring Car Championship Honda Civic Tourer race car with Bailey Pursuit 550-4 caravan in matching livery makes a guest appearance on stand

Bailey of Bristol has plenty to tempt visitors attending The Motorhome and Caravan Show at the NEC, Birmingham next week with their full range of touring caravans and motorhomes on display on Stand 19-29.

Bailey caravans have been developed using sixty five years’ experience in leisure vehicle production and design. During this time, based upon a proven track record of performance, the company has earnt a reputation for creating products providing award-winning design, first class build quality and unbeatable value for money. As a result, Bailey is now the UKs number one touring caravan brand, as well as being one of the largest in Europe, with three model ranges – Pursuit, Pegasus GT65 & Unicorn – providing something to suit every requirement.

More recently the company has brought this same level of expertise to new product sectors including motorhomes, with the introduction of the new Approach Autograph range. All of our vehicles are manufactured in our state-of-the-art South Liberty Lane production facility and are constructed using the ground-breaking Alu-Tech body shell design.

As usual, to make it easier to find the most suitable caravan or motorhome, Bailey will be arranging its vehicles by layout rather than by range. This more logical approach means that once a visitor finds a layout they like, they can then simply compare the styling and specification levels of the same model across the different product ranges.

Top of the ‘must see’ list at the show will be the new Bailey Unicorn. Our flagship caravan range is the first of our products to benefit from a new development programme featuring the use of the latest state-of-the-art CAD software by a new-look Design Team. After listening carefully to customer feedback, the team re-configured the interiors of every model to maximise the available interior living space to provide optimum levels of comfort and practicality. As result, all new Unicorn models have up to 15 per cent more floorspace, up to 10 per cent more kitchen worktop space, front lounge seats which are up to 10% longer and shower cubicles which are 25% bigger. All eight of the resulting layouts will be on display, including the Unicorn Seville which was recently crowned Tourer of the Year 2015 by Practical Caravan Magazine.

On the motorhome front all models in our best-selling Approach Autograph range feature the new-look Peugeot Boxer graphite cab, which, as well as giving the vehicle a striking new appearance, also contains a number of new practical features such as LED daytime running lights and a DAB radio with Bluetooth connectivity. The vehicle is powered by a 2.2 Hdi 130 bhp Euro 5 engine complete with a 6-speed manual gearbox and also has both cab air conditioning and engine cruise control as standard specification.

The 2015 model line up is strengthened with the introduction of two new models – the compact Autograph 540, a three-berth layout featuring a ceiling mounted drop down bed and the spacious Autograph 730, a four-berth coachbuilt motorhome with a rear transverse island bed.

We’ll also have something for the motor enthusiasts at the NEC with the appearance of the Honda Civic Tourer replica race car and matching Bailey Pursuit 550-4 on-stand for the duration of the event. This joint initiative by Bailey of Bristol and Honda’s BTCC team is designed to show that a modern lightweight caravan such as the four-berth Pursuit 550-4 can be towed by a compact family car like the Civic Tourer. Furthermore, the total weight of this car and caravan combination is less than 3,500 kg so is suitable for all drivers and does not require a driving license with B+E entitlement.