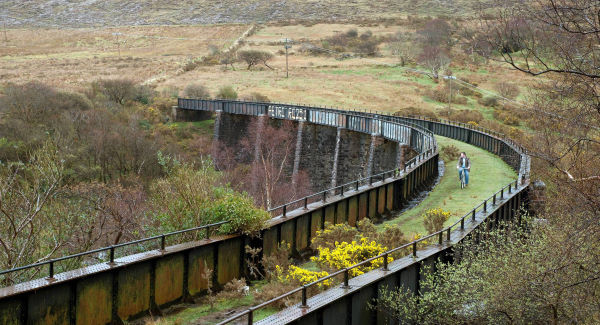 Public Transport Minister Alan Kelly has officially turned the sod on what will become one of Europe’s most iconic greenways.
The South Kerry Greenway is being constructed on an old railway line, which cuts through historic mountainous tunnels and travels across impressive long standing viaducts displaying the breath-taking scenery that lies between Reenard pier to Glenbeigh.  It is estimated it will bring 90 full time jobs to the South Kerry region with increased tourism activities.
Construction is set to start in the coming months on phase one of this project – the section linking Cahirciveen to Reenard – as funded under the Government’s stimulus measures announced last May. This section of the greenway, known as the Fertha greenway, will link Reenard point with Valentia Island, where a ferry links the mainland with Valentia Island creating an innovative loop involving the Fertha greenway as well as the Valentia and Cahiciveen marinas. It will run for 5.75 kilometres with 1.75 kilometres being on road.
Speaking at the event Minister Kelly said: “I see this greenway featuring on Lonely Planet’s best things to do in time. It is truly iconic  and I have no doubt it will bring cyclists to the Ring of Kerry from all over Europe. As Minister, I have granted €3.9million towards the project, but that will easily pay for itself in time by generating substantial revenue and 90 full-time jobs for the area – that’s the equivalent of a small industry.”
“Cycling and cycling tourism are taking off immeasurably. You only have to see the experience of the greenway in Mayo where cyclists and families from all over Ireland come to cycle the greenway. Once complete in 2016, I have no doubt that the South Kerry greenway will be considered one of the top cycling tourism attractions in the world.”

Experts warn how van conversions can VOID you...
Waterways Ireland Advises Swimmers to Swim in Designated Areas Away From Harbours & Marinas The Right Tools for the Job - Coast Guard advice