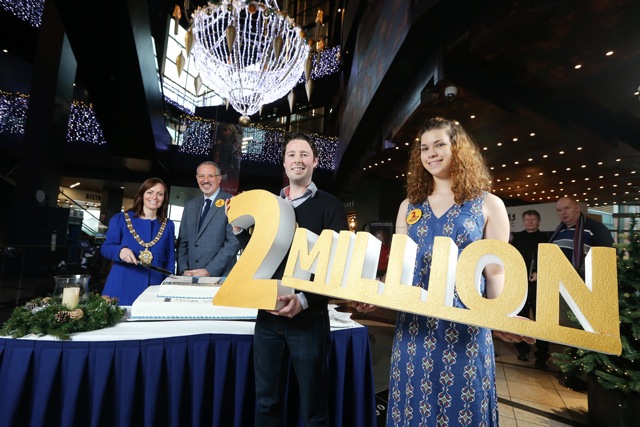 Titanic Belfast has welcomed its two-millionth visitor – just 32 months after the visitor attraction opened at the birthplace of the world’s most famous ship, Belfast’s Titanic Quarter.

Michael Sweeney, 25, a former St Malachy’s College pupil from north Belfast became the latest milestone visitor when he booked tickets to the nine-gallery exhibition that tell the story of Titanic and Belfast’s maritime history.

Having welcomed its two-millionth visitor, Titanic Belfast has once again exceeded visitor number expectations, with visitors coming from more than 145 countries.

Michael Sweeney, who works in finance with KPMG, arrived at Titanic Belfast with girlfriend Tainá Myra De Castro from João Pessoa,Brazil, to be greeted with a VIP reception welcome, led by Belfast Lord Mayor Nichola Mallon and the visitor attraction’s CEO, Tim Husbands MBE, before cutting a celebratory cake.

Michael said: “Just like Jack said in the (TITANIC) movie, I feel like the king of the world, if only for the day! It’s great to be the two-millionth visitor to Titanic Belfast. I have been looking forward to visiting for quite a while and now I won’t forget my first visit. This is an amazing visitor attraction, something everyone in Northern Ireland should be rightfully proud of.”

Titanic Belfast CEO Tim Husbands MBE, said: “It seems like only yesterday that Titanic Belfast opened and helped turn the city of Belfast into a major player in the global tourism market. We are three months short of our third birthday and already we are celebrating our two-millionth visitor. This is a tremendous achievement.

“Belfast has made enormous strides as a destination of choice for tourists and Titanic Belfast is very proud to have played a significant role in its transformation. We would like to thank the efforts of our staff, visitors, stakeholders and sponsors who have made Titanic Belfast the number one tourist attraction in Northern Ireland and one of the top attraction’s in Ireland.”

Belfast Lord Mayor, Nichola Mallon said: “It’s great news for tourism in the city of Belfast that Titanic Belfast is now celebrating its 2-millionth visitor less than three years after opening. Titanic Belfast has played a significant role in the transformation of Belfast and we look forward to welcoming many more millions of visitors in the future.”

Not only is Titanic Belfast a ‘must see’ for visitors to Ireland, it is also the place to be seen for celebrities including James Cameron, Julian Fellowes, Titanic discoverer Dr Robert Ballard, Rod Stewart, Journey, Carrie Underwood, Michael Bublé, and politicians such as Hillary Clinton, David Cameron and Shinzō Abe.

Experts warn how van conversions can VOID you...
Laika & Honda Racing Corporation together at Dakar 2015 Photos from Wellhouse Leisure's tour of Ireland in Ford Terrier!