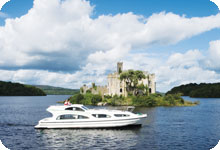 2013 was an outstanding year for Irish tourism with the number of overseas visits up by 7.1% compared to the corresponding period of 2012.

Some 6,489,100 overseas visits were recorded in the eleven month period and all of our main overseas markets have shown growth levels:

“When we designated 2013 as the year of The Gathering, we hoped it would give Irish tourism a real boost in terms of growing overseas visitors. The figures published today clearly show it has worked in that regard.

“Equally important is the legacy The Gathering will leave. Many of the events held for the first time this year are likely to become regular ones. The Gathering also had positive implications for air capacity and it looks like the extra flights and services will be maintained next year with likely further growth in access of another 6%. There have also been some very positive recent announcements regarding sea capacity – all of which is very promising in terms of making it easier for people to get to Ireland.”

In terms of events, the official Gathering website recorded in the region of 5,000 Gatherings throughout the country in 2013.

Minister of State Michael Ring complimented the work of the local volunteers: “I want to again put on record my sincere thanks to the thousands of local volunteers who helped organise Gatherings in every county in Ireland. This is another real positive legacy of The Gathering. We now have a powerful local asset that we know will come on board with us if the idea is good. Of course The Gathering is not quite over yet and I know that New Year’s Event in Dublin will be a fitting send-off to an excellent year.”

Aside from The Gathering, Minister Varadkar also listed other highlights from a tourism perspective in 2013 (see below) and expressed his optimism that 2014 will be another good year for the Irish tourism sector.

“Measures like the retention of the lower vat rate for tourism related services, the abolition of the air travel tax from April and extra air and sea capacity means that we have a very strong foundation for Irish tourism to build on as we go into 2014. We have set a target of growing visit numbers by another 4% next year and I will also be finalising a new Tourism Policy document by Easter which will set out a strategy to ensure the continued long-term growth of Irish tourism.”

Niall Gibbons, CEO of Tourism Ireland, welcomed the figures, saying: “Today’s figures for the September to November period – showing growth of +8.8% over the same period in 2012 – are very strong. I am delighted to see growth from all of our markets around the world. And I am particularly pleased to see a good return to growth in British visitor numbers (+9% for the three-month period). We are seeing record growth this year from North America (+7% up to the end of October); and from our long-haul markets (+27%), with Australia and New Zealand in particular driving that growth. Mainland Europe is also playing its part in growing tourism business from overseas this year (+6.6%); in fact, 2013 will also be the best year ever for visitors from Germany, France and Spain.”