Mercedes-Benz: The motorhomes with the ‘Star’ 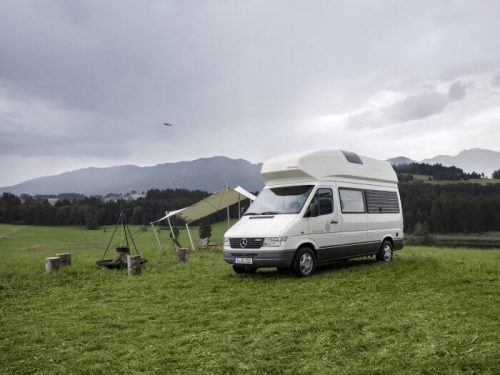 The motorhome market is booming – for Mercedes-Benz too. The Sprinter large van icon provides a great deal of the momentum here. This summer alone, motorhome bodybuilders presented over 10 new models based on the third Mercedes-Benz Sprinter generation. In order to inform customers about the new products and updates in these current times, Mercedes-Benz takes a new approach with the so called “Digital Camper Special”.

Everyone who would like to become one, can gain new insights and inspiration, 24/7. The “stars” of the digital special include new motorhomes based on the Sprinter, such as the Elegance I 910 G from Bürstner, the c-tourer T 143 LE from Carthago, the B-Class MasterLine T 780 from Hymer, and the Nova M from La Strada. To celebrate the 25-year anniversary of the Sprinter, Mercedes-Benz also presents the history of its large van icon. Moreover, the digital special showcases the most current updates of the compact Marco Polo camper and leisure van family with the star. They now boast the MBUX multimedia system and the innovative MBAC interface module which turns the Marco Polo into a smart home on wheels.

Steffen Lucas, Director Sales & Marketing Mercedes-Benz Vans Europe: “The motorhome market becomes increasingly important for us. Accordingly, we not only expand our position in the market and our role as an innovation driver – both with regards to our own Marco Polo family and in regards to our co-operation with motorhome bodybuilders. We also constantly extend our platforms and formats, so that we make the Mercedes-Benz van life world into even more of an experience for our customers; also in these very dynamic times with Covid-19. That is why I am delighted that we start our own outdoor motorhome show event, on a digital basis – the ‘Digital Camper Special from Mercedes-Benz’.”

25 years of the Sprinter: a reliable partner for motorhome bodybuilders for a quarter of a century

Since 1995 the Mercedes-Benz Sprinter has been developing into a real success model in the motorhome segment – with three vehicle generations and motorhome bodybuilders that rely on it worldwide. Competence in the van sector, however, had already been proved by the brand with the star a long time before the first Sprinter generation was launched. In 1955, the L 319 was the first Mercedes-Benz van to celebrate its debut. In 1967, the T2 model series known as the “Düsseldorf van” revolutionised the van market and was then built for almost 30 years. The model, known affectionately by its fans as the “DüDo”, acquired a reputation as an indestructible, reliable companion for journeys to the most remote places on Earth. To this day, many globetrotters still swear by their home-converted motorhomes based on former post office, THW (technical relief organisation) or army vans. In 1977, the T1, known as the “Bremen van” followed, and is seen as the direct predecessor of the Mercedes-Benz Sprinter.

In 1995, the first Sprinter came onto the market and has since then had a significant impact on the so-called “large van segment” between 3.0 and 5.5 tonnes. With disc brakes on the front and rear wheels, the ABS anti-lock braking system including the automatic brake differential ABD and many other innovations, it set new standards. At the same time it showed its prowess straight away as a true multi-talent. The first Sprinter generation was available as a choice between a chassis, platform vehicle or tipper vehicle, each with a double or a single cab. Furthermore, the panel van and the crewbus with a flat or a raised roof were available. The wheelbases ranged from 3000 to 4025 millimetres. The permissible gross mass was initially 2.59, 2.8 or 3.5 tonnes. With this versatility, the first Sprinter offered the best conditions for numerous use cases – including motorhome conversions. The motorhome bodybuilders of the early days included Westfalia, Hymer, Rapido, Dethleffs, Wochner, Frankia and Carthago. Today they are still manufacturing motorhomes based on the Sprinter.

Eleven years and a number of facelifts later, in 2006 Mercedes-Benz presented the second generation of the Sprinter, which was a further improvement in terms of variety of versions – with novelties such as the super-high roof or a fourth body length. Also, there were improved brakes, ADAPTIVE ESP with extended functions for all tonnages, the thorax airbag for the driver and co-driver, bi-xenon headlamps with static cornering and curve lights, and the PARKTRONIC system which made parking easier. With the facelift in 2013, the focus was mainly on safety. The Sprinter was the first van in the world to be fitted with Crosswind Assist – even for the open model variants.

The current Sprinter: made for travelling

A quarter of a century later, in 2018 the third and current generation of the Sprinter celebrated its premiere, meeting the needs of the motorhome segment stronger than ever before. In order to prepare the current Sprinter for the special needs of the segment, user profiles and trends were not only analysed, but motorhome bodybuilders and end-customers were also directly involved in the development process.

The result: the current Sprinter offers an even wider range of body variants than its predecessor and is also available as a tractor head, in addition to the tried-and-tested versions. This gives motorhome bodybuilders a high degree of freedom when designing the living area. The drive system types are as individual as the body variants: For the first time, the Sprinter is available with front-wheel drive in addition to rear-wheel and all-wheel drive.

In addition, the third generation of the large van icon approaches the driving comfort experience of Mercedes-Benz passenger cars. In 2018, the Sprinter was the second Mercedes after the A-Class to have the innovative MBUX infotainment system with an up to 10.25 inch touch display on board. Also, a large number of assistance systems, which had previously only been reserved for the car sector, are now included in the Sprinter equipment – for example DISTRONIC, the radar-based distance assistance system.

Variety and passenger car flair, however, are not the only trumps that help the current Sprinter to impress. The special trick: it provides features ex works, which were especially developed for the motorhome use case, such as the ergonomically shaped, swivelling driver and co-driver seats or the electric parking brake for unhindered access from the cockpit into the living area. At the top of the list, however, is the innovative Mercedes-Benz Advanced Control (MBAC) interface module. MBAC connects selected components in the living area, so that they can be controlled conveniently from a central point, such as the MBUX touch display in the vehicle’s cockpit, a separate body display with a touch function, or the MBAC smartphone app. Motorhome bodybuilders can individually determine which components are connected in the living area. The options are plentiful:

Whilst MBAC provides intelligent connectivity in the living area, Mercedes me connect enables networked applications around the cab. Among the services are the free basic services Maintenance, Accident and Breakdown Management as well as Telediagnosis and Remote Vehicle Diagnostics. These can be supplemented for example by the so-called Vehicle Set-up services upon request.

Motorhomes based on the Sprinter are booming: an extract of the latest product innovations

Catering to the needs of campers has been well-received – since its market launch in 2018, numerous new models based on the current Sprinter have been launched worldwide. In the summer of 2020 alone, more than 10 new models premiered. These include – as can be seen in the “Digital Camper Special from Mercedes-Benz”:[1]

Further details on the vehicles at the end of this document.

News about the Marco Polo family

The Marco Polo family from Mercedes-Benz – consisting of the fully equipped Marco Polo camper van and the Marco Polo HORIZON and ACTIVITY leisure vans equipped with roof bed and bench seat/berth – has innovations in store.

Only last year, the Marco Polo and Marco Polo HORIZON facelift celebrated its premiere – with new design accents in the interior and the exterior, an extended range of safety and assistance systems, and the dynamic and efficient four-cylinder OM 654 diesel engine as well as the equally new 9G-TRONIC automatic transmission. In 2020, further product updates provide even more travelling pleasure both in front of and behind the steering wheel. As of this year, for example, the Marco Polo and Marco Polo HORIZON both have MBUX in the cockpit as standard. The Marco Polo also, like the Sprinter in motorhome operation, boasts the MBAC interface module for an even smarter camping experience – from centralised control of the interior lighting to operating the sound system or monitoring the fill levels of the water tanks or the charge status of the auxiliary battery. And those are only a few chosen examples. As from this autumn, both models will be available for the first time with AIRMATIC. The air suspension system increases driving comfort on any terrain, optimises the noise level throughout the interior and also reduces fuel consumption at high speeds. Using the DYNAMIC SELECT switch in the centre console, the driver can quickly and easily choose from different drive programs: Comfort, Sport, Lift and Manual.

In good time for the beginning of the 2020 camping season, Mercedes-Benz also launched the facelift of the Marco Polo ACTIVITY, the entry-level model for the Marco Polo family. Its innovations include, for example, an updated infotainment system with Audio 10, 30 and 40; safety and assistance systems such as DISTRONIC, the distance assistance system, and Active Brake Assist; and the four-cylinder OM 654 diesel engine with a new top-of-the-range motorisation level. The Marco Polo ACTIVITY 300 d (combined fuel consumption 6.6-6.0 l/100 km, combined CO2 emissions 174-159 g/km)[2] generates 176 kW (239 hp) and a maximum 500 Nm of torque. 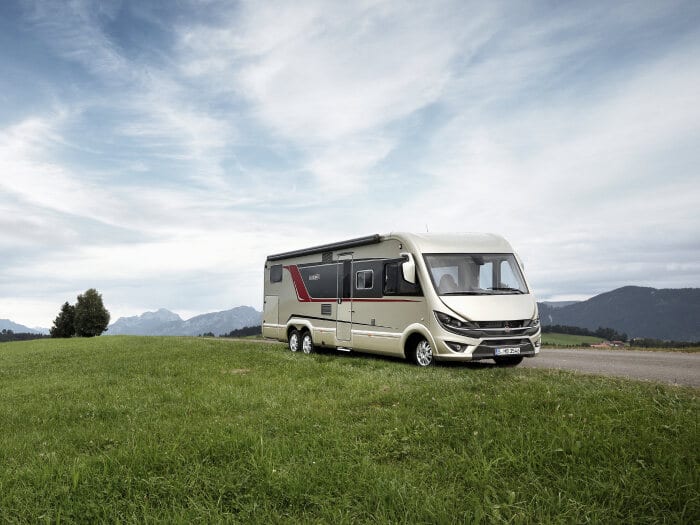