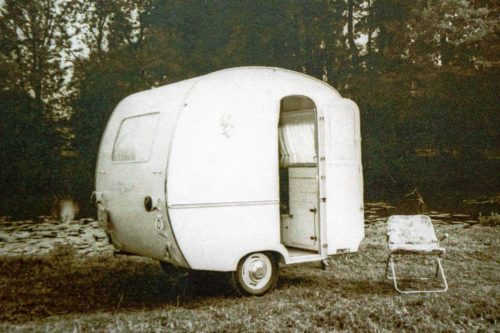 He was an engineer and an inventor who largely shaped the recreational vehicle industry: Helmut Knaus (24.7.1920 to 21.5.1991) was an architect with a degree in engineering and master builder technology. In 1960, together with his sons Helmut and Albert, he founded KNAUS KG in the town of Marktbreit, which is located near the city of Würzburg. During the peak of Germany’s post-war economic boom (“Wirtschaftswunder”), an increasing number of Germans had the financial means to purchase a vehicle. Going on a holiday in one ́s own car became a reality for many Germans – with a majority of them driving a VW Beetle. Even during the years of World War II, Helmut Knaus had the idea to construct a caravan for the new Volkswagen. It has to be compact, comfortable and lightweight. And round like a swallows’ nest, which was the name it was given.

When the KNAUS SCHWALBENNEST was introduced in 1961, the world of caravans was enriched by another top-selling model. And this was despite the fact that it wasn’t exactly cheap. With a price tag of 3,000 German Marks, the caravan cost only 800 Marks less than the standard model VW Beetle 1200 at the time. Helmut Knaus also created the matching corporate logo: a flying pair of sparrows – a logo that adorns the body of every motorhome and caravan made by KNAUS to this day. When the first Caravan Salon trade fair was held in Essen in 1962, Helmut Knaus took it a step further. Along with the MONSUN, the launch of the SÜDWIND introduced a further iconic caravan to the market. Today, both are among the best- selling models of KNAUS caravans. Years later, the SCHWALBENNEST experienced a rebirth: In 2011, the recreated caravan based on the original model was built in a limited edition of 150 units as a fitting celebration of 50 years of KNAUS.

Due to the enormous success of the KNAUS products, new production capacities, in addition to the plant in Marktbreit, were added in the neighbouring town of Ochsenfurt. In the 1960s, a modern plant, which also included its own fire brigade, was constructed. Naturally, the chassis for the fire hose trailer was designed and constructed in-house. In 1969, Helmut Knaus continued with his expansion course. In Jandelsbrunn, near Passau, the company investeds five million German Marks in a new main plant. The plant began operations in 1970. Initially, the KNAUS Jet was manufactured here. Furthermore, Helmut Knaus continued to drive the expansion of the European sales and services network, which today includes about 600 partner companies. The competitor EIFELLAND was acquired in 1973. In 1974,

KNAUS acquired the caravan manufacturer WOLFBART. In 1973, Helmut Knaus was awarded the Order of Merit of the Federal Republic of Germany for his courage and his entrepreneurship.

In the 1980s, KNAUS harvested the fruits of this tireless effort. In particular, the SÜDWIND and AZUR were sales drivers that helped KNAUS advance to become one of the leading caravan manufacturers in Europe. Today, KNAUS is one of the industry’s most successful brands and has been building both caravans as well as innovative motorhomes for over 30 years. In 1988, the TRAVELLER become the first KNAUS motorhome and immediately received the coveted title ”Motorhome of the year”, which was awarded by the trade journal “PROMOBIL”. In 1996, the TRAVEL LINER was introduced as the first fully integrated motorhome and became an immediate success. During the same year, the traditional companies KNAUS and TABBERT began a cooperation that ultimately resulted in their 2001 merger. This led to the founding of the Knaus Tabbert Group GmbH in 2002.

In 2004, KNAUS set another milestone and, with the SUN TI, redefined the vehicle class of partially integrated caravans featuring a large skylight. The following year, KNAUS launched its first camper van, which is known as a CUV (Caravanning Utility Vehicle) today.

As a result of the global economic crisis in 2008, the company filed for bankruptcy at the end of that year. However, with strong financial backing, the company restarted its operations in 2009. This was only possible because a shrewd executive team and a prudent worker’s council set the proper course. For example, the employees terminated their employment contracts voluntarily, thus enabling Knaus Tabbert GmbH to start anew.

In 2012, with the introduction of the SKY I, KNAUS set new benchmarks in the fully integrated vehicles segment and completely redefined form, function and quality. In 2013, the CARAVISIO concept designed by KNAUS introduced an entirely new streamlined design, thereby anticipating a completely new design language for caravans. In 2015, with the SUN I, the Jandelsbrunn-based company made an impressive return to the liner luxury segment. In 2016, the TRAVELINO signalled the next step in the future of caravan construction. It was the first ultralight caravan by Knaus Tabbert to that feature a revolutionary fibre-frame basis. The flexible and variable DESEO, which was launched in 2017, was designed using the same ground- breaking construction principle. Furthermore, in 2016 the partially integrated motorhome SKY TI by KNAUS was introduced. Beyond this, with its programme THE MISSION, the company is paving its future course – with the major focus being on innovative lightweight construction. Following the introduction of the L!VE model series in 2017, the largest and most attractive range of models in the company’s history has been completed. In the same year, an extensive

cooperation with VW is launched and in 2018 a similar cooperation with MAN. The BOXDRIVE based on the VW Crafter and the VAN TI PLUS as the first motorhome on MAN TGE basis are the successful results of this pioneering cooperation. In being awarded the ”Golden Motorhome 2019” by trade journal Auto Bild Reisemobil, the new KNAUS VAN TI PLUS 700 LF immediately won the special editorial prize for the “best new vehicle in 2019” – just one of numerous prizes with which the quality products made by KNAUS have been awarded and that also demostrate the extraordinary team spirit of the Knaus Tabbert employees.

To celebrate the anniversary year 2020 in fitting style in keeping with its slogan “Freedom that inspires”, KNAUS is travelling several thousand kilometres across Germany from June until the end of the year: The tour includes some of the most beautiful “meinPLATZ” camping sites. The Anniversary Tour team is bringing its expertise about caravanning topics, information about the KNAUS brand world as well as an entertainment programme of comedy, live music and culinary delights from the KNAUS home of Lower Bavaria – naturally, all in compliance with the required hygiene measures. Many people currently consider caravanning to be the safest type of holiday anywhere, #At home everywhere in your own mobile home – the KNAUS anniversary tour celebrates this lifestyle with “mein PLATZ”.