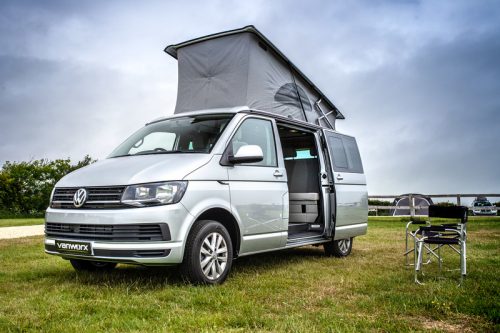 When it comes to Limited Editions, Vanworx is offering one lucky customer a one-off Volkswagen campervan that is extremely rare as it has a Volkswagen factory-fitted elevating roof (including bed) from the California, and its sliding rear seat/bed.

This is one of only two T6 window vans that Volkswagen has produced with the California’s roof, so Vanworx knew the offer to have one of them and add its own conversion was too good to miss.

As a result, Vanworx has created this unique campervan complete with its full, four-berth Slipper conversion and a special specification, including custom-made Bamboo interior furniture.

Like the Volkswagen California, this model has swivelling front seats, a portable table stored in the sliding side door, and the traditional layout with a side wardrobe and kitchen unit, with a gas hob and sink; instead of a top-loading compressor fridge, this model has an front access fridge/freezer positioned under the counter. The Vanworx Slipper conversion also includes Webasto petrol heater and 240v mains electrics.

Another unusual feature of this campervan is that it has a 2.0-litre TSI, 150PS petrol engine with a six-speed manual gearbox (instead of a diesel). It is available now for £49,995. The specification and style can be customised with options such as a bike rack, Vanworx leather upholstery and Vanworx Sports Pack including lowered suspension, 18in wheels and tyres, Vanworx angular side bars and sports front spoiler.

All Vanworx campers are converted to OEM/factory standards and designed and built to the highest safety standards, including Whole Vehicle Type Approval accreditation (a significantly higher standard than IVA – Individual Vehicle Approval – used by many other converters) and Conformity of Production status from the UK’s Vehicle Type Approval authority, the Vehicle Certification Agency (VCA).