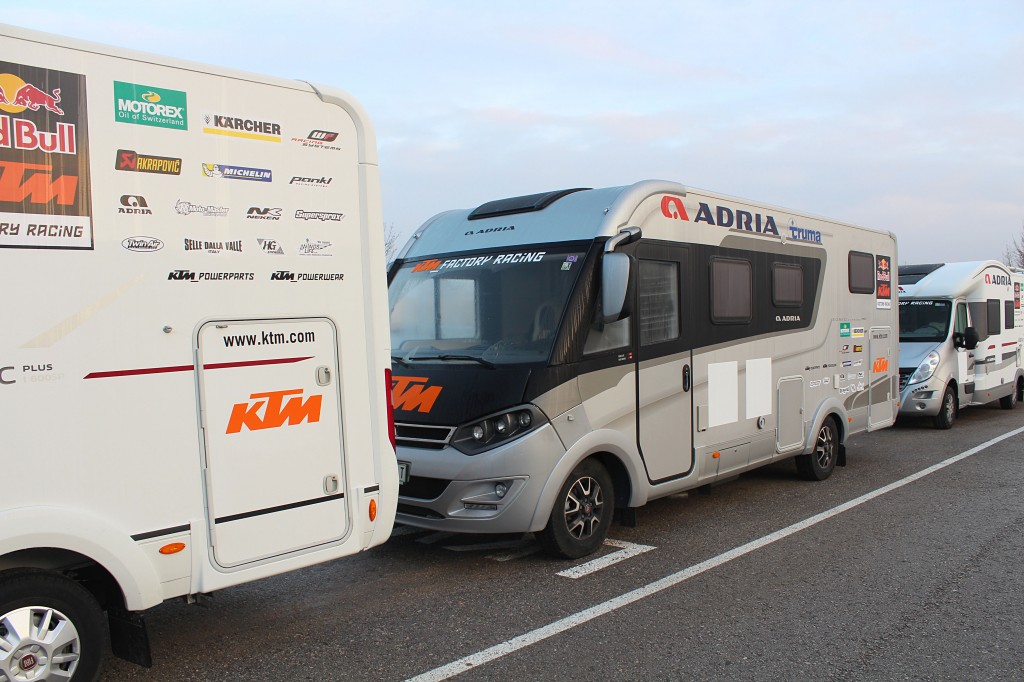 Adria has confirmed it will be supplying a fleet of new Matrix and new Sonic motorhomes to provide support vehicles for reigning Dakar motorcycle champions. This represents the third year in succession of the partnership between Adria-Mobil and KTM at the Dakar.

“Dakar represents the ultimate real world test of any vehicle, let alone a motorhome. In fifteen days, the vehicles have to cover around 9,000km of very hard driving, on all terrains, in all climatic conditions from extremely hot to near freezing temperatures and also high altitudes in the South American Andes range. Each day they race ahead of the KTM riders and get to the next basecamp to be set up to receive the team and provide a comfortable home from home for the team.

Adria is delighted to once again partner with KTM, who dominate the Dakar on two wheels thanks to their world-class riders, offroad motorcycles and professional approach to race team support. Adria have provided a fleet of s2015 new Matrix crossover motorhomes and new Sonic integrated motorhomes to tackle the 2015 Dakar adventure.

These are standard vehicles – except for some spare wheels, a spare water pump and some accessories – straight off our world class manufacturing line in Slovenia.

In 2013 and 2014 we were pleased to help KTM win and experienced perfect service from each of the motorhomes, which we expect will happen again in January,” Matjaz Grm, Director of Sales and Marketing, Adria-Mobil.

KTM Factory Racing Team are attempting to win their 14th consecutive title and their lead rider, Spaniard, Marc Coma -who won in 2014 – is also seeking his 5th Dakar win.
Dakar 2015: The Adria Line-Up

In total 5 Adria vehicles will support KTM at the 2015 Dakar.

The new Sonic, is Adria’s latest incarnation of the “A” class or integrated motorhome and for season 2015 includes new exterior and interior design including new kitchen, bathroom and panoramic windows. The Sonic is built on the new Fiat Ducato chassis and is available in Axess and Plus models with Truma heating and Supreme models with Alde heating.

The s2015 new Matrix, is Adria’s latest incarnation of the popular “crossover” motorhome, which combines the aero-dynamic low profile exterior plus the benefits of a front pull-down bed. New for season 2015 the Matrix has new exterior styling, new interior design including a new kitchen, bathroom and range of layouts to suit most users. The new Matrix is available in Axess and Plus models on the new Fiat Ducato , with Truma heating; and as Supreme models on the new Renault Master with Alde heating.

Matrix Supreme 687 SBC which offers 5 berths with central master bed to the rear and it is fitted with an optional air conditioning by Dometic, awning and extra spare wheels.

Matrix Plus 670 SL which offers 5 berths, features long beds to the rear and it is fitted with an optional air conditioning by Truma, awning and extra spare wheels.

Matrix Plus 670 SLT SP which offers 5 berths and features long beds with comfortable bathroma to the rear and it is fitted with an optional air conditioning by Dometic, awning and extra spare wheels.