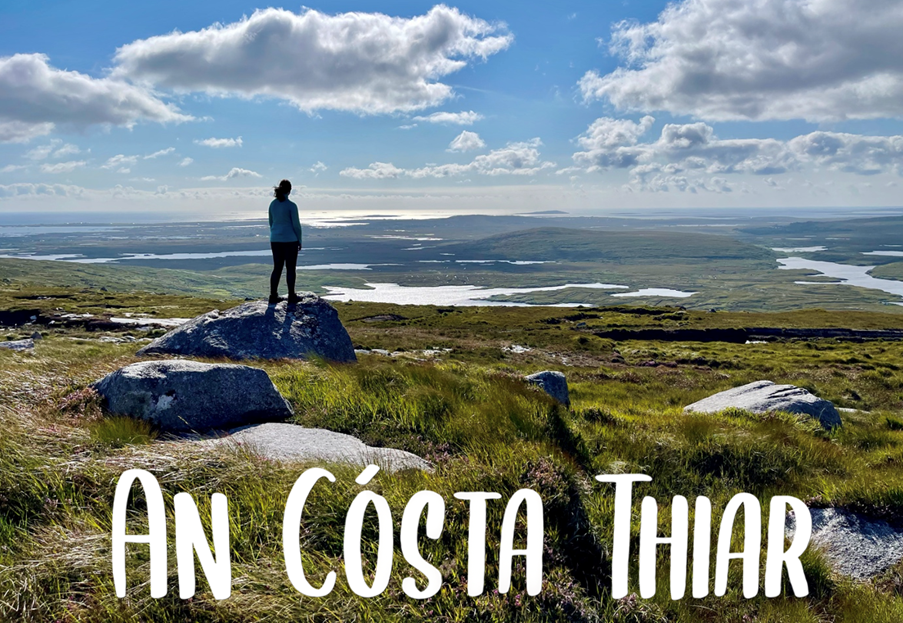 The west coast of Ireland is recognised as one of the most remarkable coastal routes in the world. The sea’s resources and beauty sustain and shape the communities that live along its shores. In this series ‘An Cósta Thiar’, Áine Ní Bhreisleáin, presenter of Bladhaire on Raidió na Gaeltachta and co-presenter of Beo ar Éigean on RTÉ Radio 1, travels down the west coast, from Donegal to Kerry, to gain an insight into the culture, challenges and benefits of living by the Atlantic and to find out if seawater still flows through the veins of its coastal communities.

On her travels, Áine will meet with the people of the coast, both young and old. She will spend time in the company of people who live and work by the sea, learning more about the attraction of these areas, and this life, through their eyes, stories and experiences. She will meet those communities and people who have a strong affinity with the coast and the sea, through new businesses, traditional livelihoods, recreational activities, ecology, birdwatching, eco-tours, swimming, boats (of all kinds) and more.

In today’s changing world, Irish people are spending more time outside, enjoying nature and the fresh air, especially along our beautiful coastlines. Many people, Áine amongst them, are drawn to the beauty, freedom and wildness of the Atlantic coast and this series provides an opportunity for the viewer to dive into the true depths of An Cósta Thiar (The West Coast) with Áine Ní Bhreisleáin.

Áine begins her journey at home in Gaoth Dobhair and bids farewell to her swim group, Uisce Beatha, beginning her trip by heading to na Rosa to learn about the historical importance of the sea from local historian Donnchadh Ó Baoill. While fishing with local fisherman Éamonn Mac Ruairí agus the renowned musician Mairéad Ní Mhaonaigh, Áine investigates the constant battle between sustaining communities and conserving our seas, and finally discovers a gem, Owey Island with Aiden Ó Fearraigh, a young man who lives for the sea and water sports.

Áine is in the wilds of Árainn Mhóir on the second leg of journey. There she meets with the brave crew of the local RNLI, Seán Mac Eamharcaidh from the local co-operative isn’t long giving her a job helping out at a fundraising race, Arranmore Adventure and she learns about a local tragedy and a history of emigration with a local historian, Hugh Mac Ruairí.  She also meets a young musical family, Fiona Nic Ghloinn agus Jesse Smith, that have moved to the island and tries her hand at sailing, will she be any good?

The third show platforms south Donegal where Áine sees a more dramatic side of the sea as she joins thrillseekers, Iain Miller and Aodán Mac Fhionnlaioch climbing on the majestic Sturall, she explores the local fishing industry from the hobbyists, like Margaret Ní Chuinneagáin, smalltime fishermen, with the Hardy family,  to the trawlers in Killybegs and goes horse riding with mother and daughter duo Sinéad and Ríona Ní Eochaidh to explore how the sea brings energy and peace to people and animals.

In week 4, Áine heads to the beautiful Achill Island, where she goes abseiling with the Mac Lochlainns under the watchful eye of outdoor instructor Tomás Mac Lochlainn, learns about how people have made a living from the sea since the time of Gráinne Mhaol with Máire Uí Chaoimh and investigates how they continue to do so today, between Oyster farms, outdoor activities, sea-safaris and more.

Half way through her journey from Donegal to Kerry, Áine is in Carna in Conamara for show 5 where she learns about the aquaculture industry in Ireland with local marine biologist Macdara Ó Cuaig, she sails a Galway hooker for the first time with brothers Ciarán and Dónal Josie Mac Donnacha, explores the future for this coastal community with Clíodhna Ní Chualáin and Veronica Ní Loideán as well as meeting the next generation of marine biologists under the careful direction of Róisín Ní Bhriain.

In the sixth programme, Áine continues her journey on the Galway coast, this time in Cois Fharraige, gathering seaweed with a local businessman Noel Lee. She visits a site that proves people have lived on this coast for thousands of years with local historian Seán Ó Coidealbha, visits the Claddagh with local TD Catherine Connolly, learns how to steer a Galway hooker with Bádóirí an Chladaigh and goes kayaking with an Olympian, Éadaoin Ní Challaráin!

In programme 8, Áine continues her journey, heading for the west Kerry coastline this time around, rowing with a local musician, Breanndán Ó Beaglaoich, a boatbuilder Eddie Hutch and even All-Ireland champions in Cumann Rámhaíochta an Daingin. She investigates the attraction of sea swimming for local women with local group ‘Snámh for the Soul’ goes foraging and paddleboarding with a woman who lives and breathes the sea and all it has to offer, Susan Feirtéar.

In the penultimate programme, Áine continues on her journey around the Corca Dhuibhne coast, exploring the history of trade in An Daingean with Brenda Uí Shúilleabháin and how the coast inspires artists with the talented Tomáisín Ó Cíobháin. She takes a class with local yoga instructor, Ails Ní Chonchúir and heads out to sea with local guide, Eoghan Ó Slatara,  to learn about the islands on the west Kerry coast and she tastes some local seafood but she has to cook it first at the Dingle Cookery School.

Áine ends her journey in Uíbh Ráthach, in South Kerry. She gains a different perspective on the sea while snorkling with Gráinne Ní Ailín from Sea Synergy and surfing with Cian O’Connor, explores the long history of this coastal community from the time of the Milesians with poet and historian, Paddy Bushe, and learns about the Seine boat with a local TikToker, Séaghan Ó Suilleabháin, better known as The Kerry Cowboy, and is their a better way to finish her journey than a first visit to the majestic Sceilg islands?