All-around the world with the Mercedes-Benz Unimog 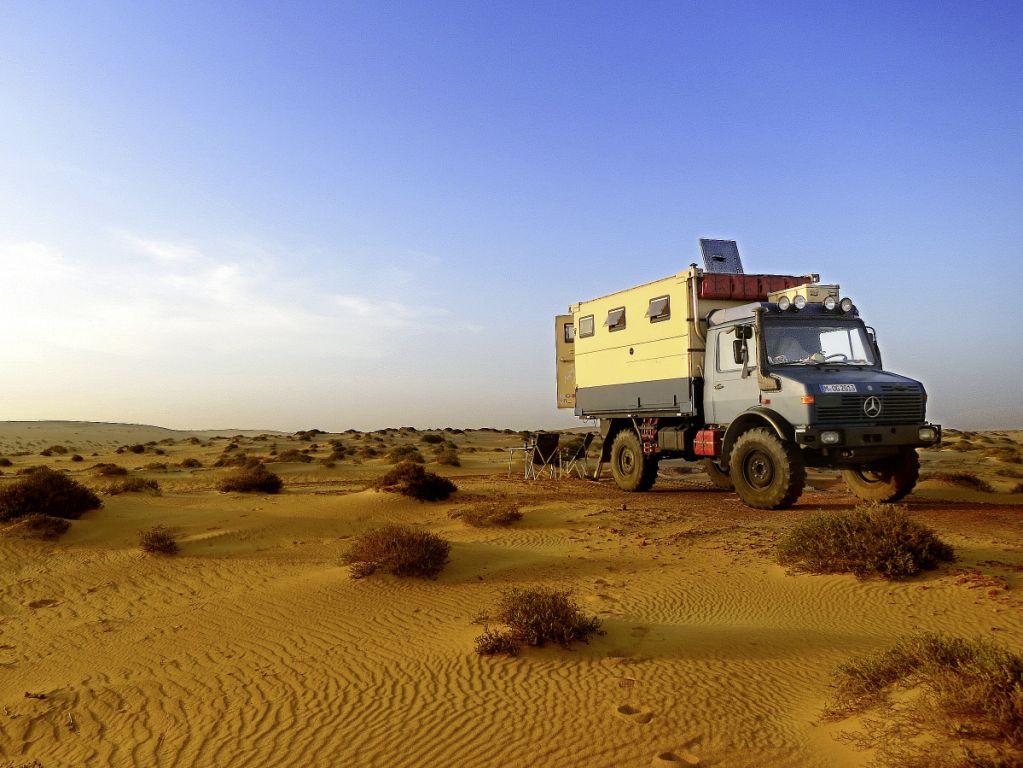 Since April 2013, a Mercedes-Benz Unimog 1300 L has been a new home on wheels for Jennifer (36) and Peter Glas (41). They are undertaking a protracted honeymoon trip in their “mobile home”, which goes by the name of the “Glaarkshouse” – a combination of the two adventurers’ surnames, Glas and Parks – Jennifer’s maiden name.
“If a vehicle is to take us to the roof of the world, it has to be a Unimog” the two decided, and duly opted for a Unimog U 1300 L (model series 435) dating from 1986. With a full tank of 540 litres of diesel and 180 litres of fresh water on board, the Unimog weighs around seven tonnes. Thanks to differential locks and portal axles it nevertheless remains safe and astoundingly light-footed in all situations to this day, however. The Unimog’s incomparable reliability, the size of the tanks, the solar power supply and a small sanitary area make the “Glaarkshouse” a genuine round-the-world trip mobile home which also lends itself to self-sufficient trips over several days in rough terrain far away from any form of infrastructure.
The grand trip began in April 2013, leading through south-eastern Europe and the frequently rough terrain of the Anatolian highlands: no trail was too rocky, no river too deep and no track to steep. After this initial minor test in Turkey, the journey continued on into Iran. The sand dunes in the Dasht-e-Kavier desert posed a somewhat greater challenge. But much more impressive than the ease with which the 435-series Unimog cruised through sand and rock were the shining eyes of the Iranians at the strange sight of the Unimog. There were countless occasions on which Mercedes-Benz fans took the opportunity to scrutinise the vehicle from below and take a peak into the engine compartment.
After spending a number of unforgettable weeks in Persia, Jennifer and Peter Glas finally had a chance to really put their four-wheeled travelling companion through its paces in Oman. Here again, no dune was too steep, no desert too vast and no beach too far. The desert-savvy Omanis were also delighted to encounter the Unimog – which even pulled a number of stranded SUVs out of the sand.
The globetrotters are currently in India, where the Unimog’s seat height is proving particularly advantageous in offering good visibility in the bustling traffic on India’s roads.
The couple will soon be moving on to Nepal, Tibet, China and Mongolia. No end is in sight as yet on their thrilling adventure. Their exciting stories from along the way, photographs and details of their route can be followed at www.glaarkshouse.com and on Facebook under “Glaarkshouse”.
Tweet

Experts warn how van conversions can VOID you...
Vantastival 2014 – Line Up Announced University of Bath shows how it has influenced design of Bailey Caravans