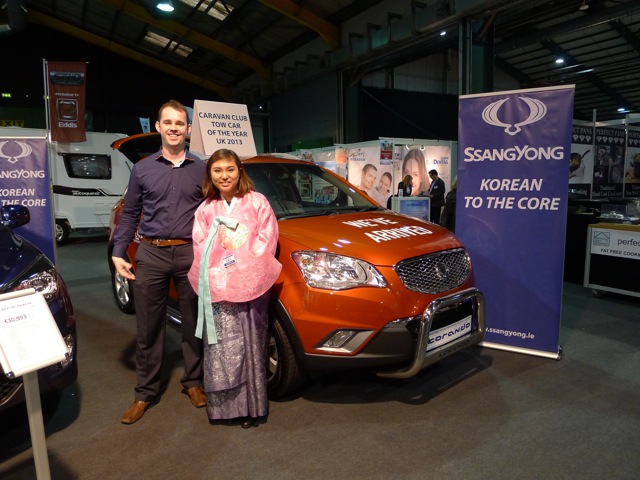 SsangYong Motors Ireland won a lot of new fans at the Holiday World Show at the RDS Simmonscourt at the weekend. The Korean car brand showcased its seven seater people carrier the Rodius, the Korando Sports, the award winning Korando and the Korando Commercial.

Head of Marketing at SsangYong Motors Eoin Mulvihill stated, ‘this was the first time to showcase the Korando Commercial publically since it had won the Irish Continental Commercial SUV of the Year 2014, and having that badge of honour was a huge crowd drawer. Members of the Korean Tourism Board were also delighted to see that Korea’s longest running car brand had been received so well in the Irish market.’

However, the main attention grabber for caravan enthusiasts on the day was the Korando, which had won the Caravan Club Tow Car of The Year 2013 (UK) for its two tonne towing capacity. The Korando Sports which features 2.3 tonne towing also proved popular, while the seven seater Rodius was most popular amongst larger families who were considering lengthy trips abroad.

The Holiday World Show is one of Ireland’s largest annual exhibitions of holidays, destinations and vehicles that suit camping enthusiasts.

Experts warn how van conversions can VOID you...
Irish Ferries - Still the best! 'Corrie' Soap Star on the Bailey!