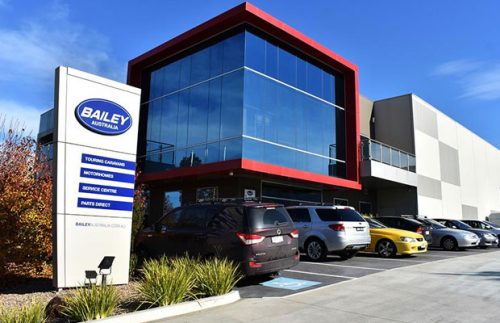 Following a strategic review of its businesses, Bailey of Bristol has taken the difficult decision to cease its manufacturing operations in Australia

Company has ambition to ensure that the Bailey brand continues in Australia and is currently exploring various options under which this could happen
Following a strategic review of its businesses, Bailey of Bristol has taken the difficult decision to cease its manufacturing operations in Australia.

The company has been distributing its caravans in Australia since 2010, where the brand has gained positive traction. As in the UK, one of the key selling points for Bailey caravans is the Alu-Tech body shell construction system, which produces vehicles that are more robust, more durable and yet lighter than those manufactured using conventional methods, making them ideally suited for the rugged terrain and harsh climatic conditions found in Australia.

Initially Bailey carved a niche for itself there by supplying models from its existing UK built ranges, which were tailored to suit the local market both in terms of product specification and ensuring that they were fully compliant with stringent Australian type approval standards. More recently in 2015 in order to capitalize fully on the opportunity that this market afforded, Bailey took the decision to form a wholly owned subsidiary company, Bailey Leisure Pty Ltd, and began manufacturing in a new plant in Melbourne, Victoria.

The first locally produced Bailey range was the Rangerfinder, which was developed using a combination of Anglo-Australian design expertise to create models specifically tailored to the Australian audience. In addition to satisfying the local market Bailey Leisure Pty Ltd also began supplying its products to New Zealand via the official Bailey Distributor in that country.

Challenging economic conditions, both in the UK and Australia, have however necessitated that Bailey of Bristol undertake a strategic review of its global activity and as a result the difficult decision has been made to cease operations in Australia. Instead, the company will concentrate all future manufacturing activity in the UK and focus on the production of its core caravan and motorhome product ranges.

The on-going supply of UK manufactured caravans and motorhomes to the New Zealand market will not be affected by this decision.

An orderly wind down of the Australian operation will commence immediately and Bailey of Bristol expect these to be completed by the end of August or shortly thereafter. As part of this process appropriate arrangements will be made to handle existing employee, customer and supplier responsibilities. This will include honouring the existing warranty and service commitments for Australian-built caravans sold both in Australia and New Zealand markets. Information on these new arrangements will be announced shortly.

In spite of this development the company has ambition to ensure that the Bailey brand continues in Australia and is currently exploring various options under which this could happen.