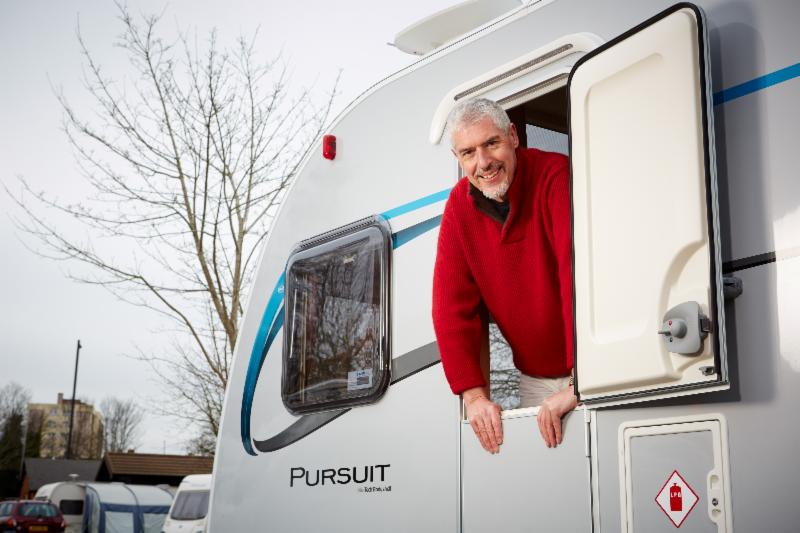 While most people use caravans for their holidays or hobbies, actor Arthur Bostrom, most famous for his role of Officer Crabtree in the hit TV series ‘Allo! ‘Allo! has proved that his Bailey Orion 430-4 was a perfect home from home for six months last year while working and appearing in a stage production at 28 venues across the UK and Ireland.

Having never been in a caravan before last year, Arthur’s life on the road has completely changed his perception of caravans, campsites and his fellow caravanners. Arthur now plans to produce a book of his travels and experiences, and has also recorded a video talking about some of the things he loves most about caravanning, and his new Bailey Pursuit, which is now available on the Bailey of Bristol YouTube channel:

This year, Arthur is looking forward to doing more exploring and has already spent his first nights away in his Pursuit 430-4, which he has already named “Perseus”, at the Baltic Wharf Caravan Club site in Bristol. As the site is located just round the corner from the Bailey factory, Marketing Director Simon Howard was able to drop in to give Arthur a run-through on all the new features on his caravan including the powerful new Truma Combi Boiler heating system.

Arthur said: “A caravan was perfect for my tour last year. Being able to come back to my own space every night was so much better than constantly moving from hotel to hotel, living out of a suitcase and eating in restaurants all the time. I’ve met so many really helpful and friendly people, and stayed on some great sites, ranging from the five star resources of Caravan Club sites, to idyllic, remote Certificated Locations where having the Orion’s end washroom and shower was a real luxury.

Arthur’s caravan of choice, this time round, is a Bailey Pursuit 430-4 which has been loaned to him by the Bristol-based manufacturer for an extended period. All Pursuit models feature a compact and aerodynamic bodyshell making it easy to tow, easy to park and easy to store, providing the flexibility of use as a mobile base which he can easily move from site to site as he travels around the country. The caravan is built using the same high performance Alu-Tech construction system featured in the other Bailey ranges and also includes a GRP outer skin for extra durability and improved insulation.

The compact exterior of the vehicle disguises spacious interiors with everything required for anything from a weekend break to an extended holiday. As well as being supplied with all the facilities you would expect in a modern caravan, including central heating plus fully equipped kitchens and washrooms, his Pursuit also includes a number of luxuries, such as a microwave oven and a branded Radio/CD/MP3 player, to ensure that Arthur will be totally self-contained.

After settling in to his new caravan, Arthur added: “I love it, and will be letting everyone know how I get on and where I get to in it in regular blogs on The Caravan Club website. My Pursuit has the same layout as the Orion, with a very comfortable fixed bed, but has several simple improvements to the design that will make using it even better.”

Simon Howard, Marketing Director, Bailey of Bristol commented: “Having spent so much time in his Orion last year Arthur clearly knows his way around the caravan very well and it was great to hear his positive comments on the changes we have made to the new Pursuit range.”

“We very much look forward to reading more about Arthur’s adventures with ‘Perseus’ on his ‘Club Together’ blog throughout the year,” he added