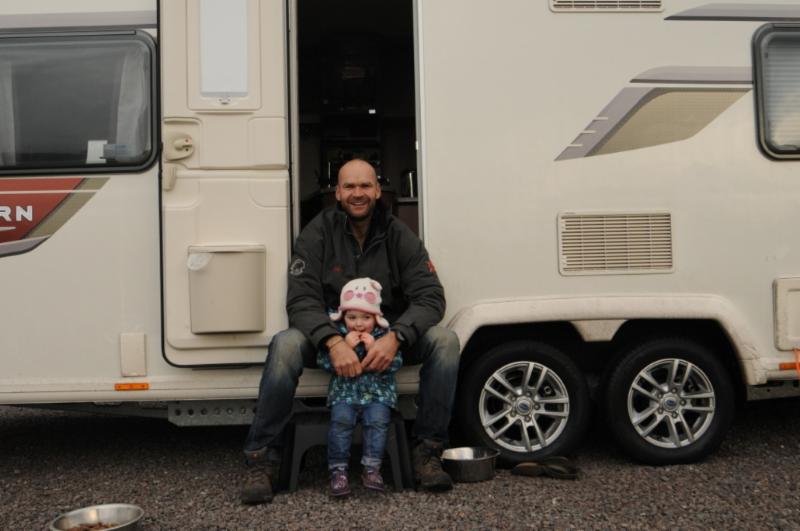 The list of explorers, sports people and TV personalities using Bailey leisure vehicles continues to grow, but the latest is a well-known dog, Reuben, who recently toured North East England and Scotland with his owner, TV presenter, travel writer and marine biologist Monty Halls and his family in the luxury of a Bailey Unicorn caravan.

Reubs, as he likes to be known, follows Monty everywhere and has become famous after appearing alongside him in many of his TV programmes, including the popular BBC Great Escape series, and even stars in his own video montage on the Monty Halls Great Escapes YouTube page: https://www.youtube.com/user/MHgreatescapes

Reuben, Monty, his partner and their daughter started their caravanning trip in the North East of England to visit Durham and Newcastle, before crossing the border for a tour of Scotland, taking in Edinburgh, Stirling, Lock Lomond, Inverness and Applecross to give a series of talks about his adventurous experiences in the great outdoors while filming his TV programmes, and signing copies of his books and DVDs.

Having led expeditions throughout the world in all weathers, and as a former Royal Marines Officer, it comes as no surprise that Monty undertook his caravan tour to some of the coldest parts of the UK in the middle of winter.  Fortunately, unlike most of his trips, this time he was spoilt by having a top-of-the-range Bailey Unicorn in tow with a high performance Alu-Tech bodyshell offering market-leading thermal efficiency and a full Alde central heating system to keep them warm and protected against the elements.

Monty has had plenty of previous towing experience, mainly with boats, and consequently had little difficulty in navigating the caravan on the 800 mile journey from Bristol to Scotland and back again. They chose to stay at The Caravan Club sites at Whitewater in Stockton-on-Tees and Strathclyde Country Park outside Glasgow, both of which are in stunning locations with plenty of wildlife, parkland and scenery for Monty, his family and Reuben to enjoy.

Commenting on his trip, Monty said: “The combination of travelling with my young daughter and my best pal, Reuben, meant a caravan was loads more practical for us than staying in a hotel. It meant we were fully self-sufficient and could stay in my natural habitat – the outdoors, and constantly surrounded by amazing scenery.”

“Best of all, the Bailey Unicorn always kept us warm despite the wintery conditions outside, and towed like a dream. It’s perfect for exploring all year round,” he continued.

Simon Howard, Marketing Director, Bailey of Bristol said: “We’re delighted that Unicorn performed so well for Monty and his family, plus Reuben. This really proves that our caravans are perfect for families, for using all year – and for dogs!”