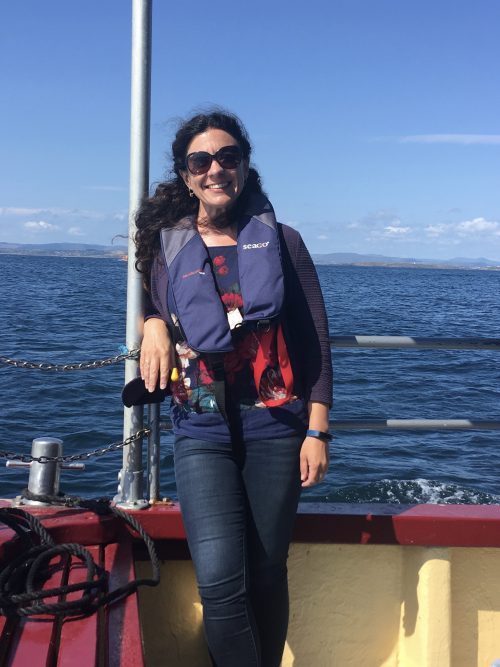 Ireland has over 60,000 townlands, each one having a unique personality and perspective. In this series, Síle Nic Chonaonaigh visits townlands across the country, investigating the strong connections people have with their native places, through the culture, the ways of life, and the landscape. In this week’s episode Síle visits An Ghleann on Clear Island off the coast of Cork, a townland and community that has always welcomed visitors, was a hub for transatlantic communication at the turn of the last century and is at the mercy of the Atlantic and the worse the weather can give.

The Glen boasts a wealth of natural beauty, history, maritime culture as well as thriving businesses. The decline in population is a challenge, however some have come home to roost and other new people have come to the Glen to settle to make it their home.

Séamus Ó Drisceoil introduces Síle to the island outlining the changes in population over the years and the unique community project where 40 acres of land have been purchased by inhabitants of the island to be preserved forever for the people of the island.

Síle calls in to see the hostel run by islander Áine Ní Ríogáin since she returned home in 2015. The building was originally built in 1830 and survived throughout the decades until Storm Ophelia struck in 2015. Áine believed the damage caused by the storm could never be undone but, with the help of the community the building was restored and opened again as a hostel. Life on the island is challenging – as well as running the hostel, Áine works 4 part time jobs in the winter to keep things going.

Mícheál Ó Céadagáin – is a fisherman who also brings visitors on whale watching trips. He is concerned that the depth of local lore, tradition and knowledge of the the seas around the island will be lost within 20 years as there are no young people from the island working on boats .

Síle also calls in to Tríona Ní Lionnáin who has also returned to the island and is now running a B&B.

Diarmuid Ó Drisceoil shares the history of the island with Síle as they visit the highest point on the island, Cnoicín an tSeabhaic, where there is an old watch tower and lighthouse.

Mikie Ó Drisceoil tells Síle about the old telegraph station built by Reuters in 1860 – to pass on messages from boats coming across the Atlantic. There was stiff competition at the time – Marconi had a base on the mainland, but Reuters could get the news first because local boatmen would go out to the ships, take the news, give it to the telegraph operator who would pass it on the rest of the world.

Fiona MacLachlan moved to the island when she was two and a half years old. She has a farm on the island conserving native species of horses, cows, bulls and pigs. Watch this episode on TG4 27th March 8.30pm (repeated Saturday 30th March 1.55pm). It will also be available at www.tg4.ie/player