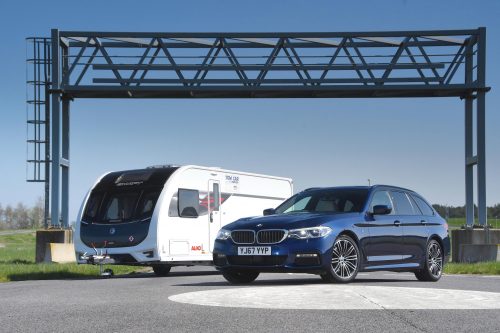 The Tow Car Awards 2018 have named the top 10 best cars for towing currently available, ranging from the Volkswagen Polo to the Land Rover Discovery, with BMW taking the ‘overall winner’ title for the first time this year.

This is the 12th year that experts from Practical Caravan and What Car? magazines and The Camping and Caravanning Club have put the latest cars through a gruelling set of tests, including hill starts, emergency lane changes, acceleration and braking, and high speed stability, on the private test tracks at the HORIBA MIRA Proving Ground in Warwickshire.

Each car is matched to a caravan from a fleet supplied by caravan manufacturer, the Swift Group, or a trailer, ballasted to the recommended maximum of 85 per cent of its kerbweight (or less if the manufacturer’s towing limit is lower). Cars are also assessed for value for money, ride comfort, running costs, refinement and passenger space, as well as the practicality for carrying a typical load of camping or holiday gear.

The 2018 winners include some regulars like the Skoda Octavia (Up to 1400kg weight class), Skoda Superb (1400-1549kg weight class), and the Land Rover Discovery (1900kg+ weight class) which all delivered an unbeatable performance in their weight classes, plus some newcomers, such as the Volkswagen Polo (Best Ultralight Tow Car) which made a fine and stable tow car, the Kia Stinger (Best Petrol Tow Car) which proved you don’t need a large estate or SUV to go caravanning, and the car chosen as the top tow car in the 1700-1899kg weight class, as well as this year’s overall winner, the BMW 520d Touring.

David Motton, tow car editor, Practical Caravan magazine, described the overall champion as: “a clear winner,” after beating some tough competition in its weight class, such as the Jaguar F-Pace and Volvo XC40.

“Clearly, this is a towing competition first and foremost, and when it comes to pulling a caravan confidently and securely, the BMW 5 Series has few peers. There wasn’t a single one of our towing tests in which the BMW showed any weakness,” added David Motton.

Other successful cars this year include the Peugeot 5008 (1550-1699kg weight class), a practical seven-seater with impressive towing stability at speed and in the emergency lane-change manoeuvre, the new Volvo XC40 (Best Family SUV) that proved it had the power and stability to make a suitable match for a broad range of caravans and trailers, plus the Hyundai i30 Tourer (Fuel Economy Award) which was the most economical and also one of the most stable tow cars tested.

Robert Louden MBE, Director General of The Camping and Caravanning Club, said: “We really value the Tow Car Awards because they demonstrate you can enjoy caravan holidays towing with such a wide range of cars, from the value-for-money of a Skoda to something as compact as a Volkswagen Polo, or the premium luxury of the overall winner for 2018, the BMW 5 Series – either as a new or used-car purchase.”

“Congratulations to all this year’s winners, and many thanks to all the judges and officials who worked so hard to deliver these important results,” Robert continued.

The winners of the Tow Car Awards 2018 (by weight classes and special categories):