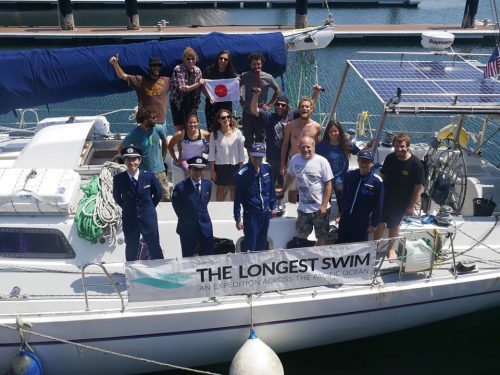 High-profile activities that promoted ocean protection are important for the success of World Oceans Day.

People like the 51-year-old Frenchman Ben Lecomte, who is swimming the marathon distance of 9,000 kilometres across the Pacific from Japan to California to highlight the problem of marine debris and whose aim is – in his own words – “to attract public attention all over the world”, are genuine heroes of our time. Lecomte’s tough swim through the Pacific, which is taking him right through the middle of the “great Pacific garbage patch” with its almost 80,000 tonnes of plastic debris, can be followed on the website www.thelongestswim.com.

boot Düsseldorf has also been supporting international ocean protection projects and activities for many years now and has a successful and well-known ambassador in the British sailor and ocean activist Emily Penn. Since 2017, the “love your ocean” stand at the trade fair has in addition presented ocean protection activities and ideas, provided advice and information about water quality or has invited child researchers to get involved. 2017 was the year in which the “ocean tribute” Award was launched too; it was presented for the first time at boot 2018.

The prizewinners this year were the Green Boats project, The Ocean Foundation and the logistics company Fairtransport. Ocean protection projects and organisations from all over the world can already apply for the “ocean tribute” Award 2019. The application portal for the Award https://oceantributeaward.boot.de/ has been opened and high-impact projects that as a result lead to substantial improvements in ocean and water quality, that integrate as many people as possible in their activities and network with many other players are invited to apply for the prestigious prize.

Step into the world of the 2021 model Wellhou...
BMW - Overall winner of Tow Car Awards for first time New Knaus Tabbert GROUP products for MY2019