Brittany Ferries bookings, in and out of both Cork & Rosslare, are up by 44% – France most popular 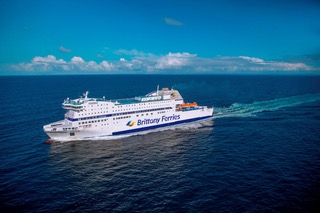 Brittany Ferries has announced that this year’s bookings, in and out of both Cork and Rosslare, are up by 44 per cent on its figures for 2019, the last ‘normal’ year before Covid disrupted travel and holiday plans.

The company’s Irish general manager Hugh Bruton said that while it is still early in the year, numbers travelling on all Brittany Ferries’ routes to and from both Spain and France are showing healthy increases.

“Undoubtedly the lack of travel during the last two years has created pent-up demand, particularly amongst Irish holidaymakers travelling abroad. But we are also seeing healthy increases in the number of French and Spanish visitors coming to Ireland.

“While the UK has always been the primary destination for French customers, across our total Ireland/UK business currently we are attracting 49 per cent of all the French holidaymakers travelling with the company, to Ireland. Those numbers are unprecedented.”

Last month Brittany Ferries’ President Jean Marc Roué and the company’s chief executive Christophe Mathieu were in Ireland to make a number of important investment announcements in relation to the company’s long-term commitment to its Irish routes.

They confirmed that the new midweek sailing launched last year connecting Cork with France and operated by cruise-ferry Armorique will become a permanent feature of the company’s sailing schedule in future years.

They also announced that in November of this year they would be introducing a larger and more cruise-orientated ship Galicia on their Rosslare-Bilbao route, replacing Connemara. The Galicia cruise-ferry is one of the newest additions to the Brittany Ferries fleet having been launched in December 2020.

“As we restart overseas tourism to Ireland this year, the announcement that Brittany Ferries’ bookings for sailings from Roscoff to Cork and from Cherbourg and Bilbao to Rosslare are up by 44 per cent on 2019 is very good news and a real vote of confidence in Irish tourism.

“As an island, the importance of convenient, direct access cannot be overstated – it is absolutely critical to achieving growth in inbound tourism. We already work very closely with Brittany Ferries and we look forward to continuing to co-operate with them to maximise the promotion of their services.”

Brittany Ferries was conceived in 1972, starting life as a freight-only service on 2nd January the following year. The first sailing linked Roscoff in Brittany with Plymouth in the South of England and carried a cargo of artichokes and cauliflowers. Since then the company has progressively launched, then strengthened shipping routes. Today millions of passengers and businesses transporting goods by sea across the so-called Atlantic Arc (France, UK, Spain and Ireland) rely on the links forged through six decades of operation. In addition to cutting congestion and emissions on busy roads, these motorways-of the sea have helped enrich local communities, creating jobs and nurturing international tourism.