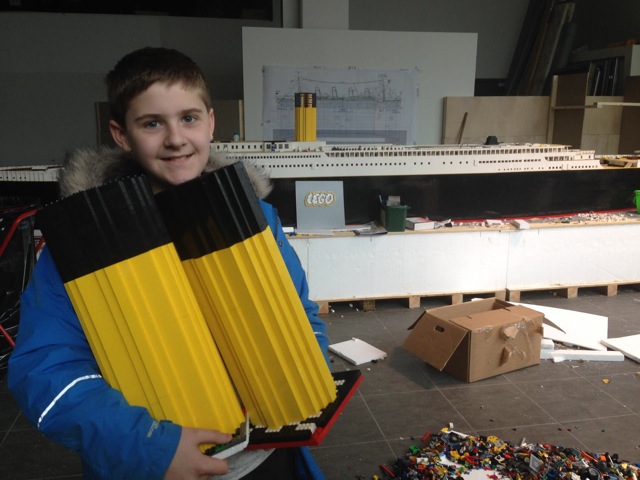 Brynjar Karl (aged 12) from Ryekvick, Iceland, fulfilled his dream to visit the home of the Titanic, Belfast, after building a six-metre scale model of the Titanic using over 56,000 LEGO blocks.

Brynjar, who combined his love of both LEGO and ships to build his favourite vessel, was treated at Titanic Belfast, the world’s largest Titanic visitor experience.

Brynjar spent a year, every day after school, building the fully lit model which features 56,000 LEGO pieces. Working with his grandfather, he utilised the original plans of the Titanic and spent months prior to the build researching every detail, from windows, doors and cargo to ensure the model was 100 percent accurate and in scale with the LEGO people on board.

After completing his model, it was his dream to visit Titanic Belfast and learn more about the ship from her conception, construction and launch in the early 1900s to her famous maiden voyage and tragic end.

During his visit Brynjar was treated to the ultimate White Star treatment with Titanic Belfast’s Premium Pass. He experienced not only the delights of the Titanic Belfast’s fully immersive nine gallery exhibition, but the last remaining White Star Line vessel, the SS Nomadic, as well as the award-winning Discovery Tour, which highlights the famous barrel-vaulted Harland & Wolff Drawing Offices and the slipways where the ship was built and designed.

Brynjar Karl, commented, “After studying the Titanic and working on my model for so long – it was very exciting to finally visit Belfast, the home of the Titanic. Titanic Belfast really brought what I knew about the Titanic to life and allowed me to delve deeper into the story and find out more! I loved that I could see what it would have been like on-board the Titanic! Titanic Belfast is a must-see for anyone with an interest in the fascinating Titanic story and I can’t wait to tell my friends about my visit when I get back to Iceland!”

Tim Husbands MBE, Chief Executive of Titanic Belfast, added, “We were delighted to have Brynjar with us today at Titanic Belfast. Bynjar’s story is an inspiration. It highlights again Titanic’s enduring appeal and its ability to capture hearts and minds throughout the world!”