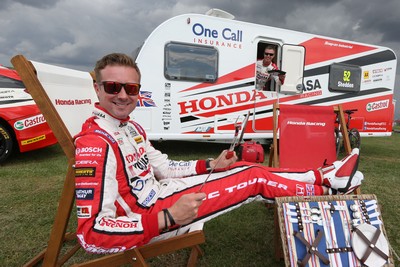 It is no secret that Honda Yuasa Racing team-mates Gordon Shedden and Matt Neal are buddies away from the racetrack as well as on it, but during the 2014 Dunlop MSA British Touring Car Championship summer break, they put their friendship to the ultimate test – with a road trip in Honda’s all-new race-liveried caravan, a Bailey Pursuit 550-4. Shedden and Neal hit the road after their last race with their newest toy – painted in Honda Yuasa Racing colours behind their Civic Tourer replica race car.

The dynamic duo set off cross-country for Snetterton, pausing en route only for picnics, barbecues, a spot of mountain-biking and the odd argument over map-reading skills. So were they still happy campers by the time they pitched up in Norfolk for the resumption of the 2014 BTCC campaign?

“I’m more used to motorhomes than caravans, to be truthful, but I have to say this new Honda Yuasa Racing-liveried caravan looks sharp!” remarked Shedden, who sits just 15 points adrift of the championship lead. “It also underscores the inherent abilities of Honda’s new Civic Tourer, which is a very capable tow car and ideal for family journeys.

“I’ll tell you one thing, though – Matt’s map-reading is atrocious! For somebody who’s been racing at Snetterton since 1800-and-something, you’d think he’d know his way here by now!”

“Listen, when you’ve been around for as long as I have, you tend to nod off when you’re in the passenger seat – and each time I woke up, I was a little disorientated,” countered three-time BTCC title-winner Neal. “Besides, if ‘Flash’ had let me take the wheel, we’d have got here a lot quicker! Talk about ‘Driving Miss Daisy’…”

“Anyway, beyond all the squabbles, it was a great trip – Bailey have done a superb job with this because it’s a mega-comfortable caravan, and our friendship is still just about intact,” he added with a wink. “We’re both feeling relaxed, refreshed and ready to race again at Snetterton. Bring it on!”

Moments after stepping out of their Civic Tourers at the end of the weekend’s opening encounter – in which they took the chequered flag respectively third and seventh – Neal and Shedden stepped into the replica race car for a lap of the circuit with the caravan, marking its official public debut. Make sure to keep your eyes peeled for the Honda Yuasa Racing caravan over the remainder of the summer!