Caravan of the future becomes a reality 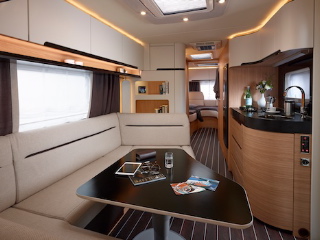 Visitors to trade shows in Europe over the past couple of years may have come across the “Caravisio”, a concept by German manufacturer Knaus-Tabbert into the caravan of the future (see www.caravisio.com. That study was never intended to make it into production, however Knaus-Tabbert has now unveiled the Eurostar, a ready-for-series-production caravan that has adopted much of the overall concept of the original concept.

Speaking about the “Caravisio” prototype, Swen Dluzak, head of product and brand management (KNAUS and WEINSBERG) said the manufacturer wanted to initiate a broad discussion about the future of caravans as a response to decreasing registration figures of caravans in Europe, and particularly with the intention of raising interest in camping as a form of holidaymaking among new target groups and target groups outside the industry. “The public interest that we achieved with this project exceeded even our highest expectations”, he said. “The numerous positive responses for us were a confirmation that with this study we had hit the nail on the head.”

The new KNAUS Eurostar Knaus Tabbert GmbH features an innovative layout concept with modern detail solutions for kitchen, bath, and living room from the “Caravisio” study. The central element in the kitchen is a high-quality induction hob, which is accompanied by a deep stainless steel sink and mixer tap. The generously sized seating area can be changed from a lounge into a home office with connections for laptop or tablet. Between living room and sleeping room the large bathroom has a modern bench toilet and a sturdy plastic washbasin as well as a large shower cubicle with GRP without any disturbing joints. The KNAUS Eurostar is specifically designed for the requirements of technology oriented customers who intensively use their caravan and attach great importance to individual equipment. Externally the sporty character of the exterior is defined by the specifically developed LED rear lights with glowing elements. The side walls of the Eurostar 650 ES are constructed in TVT (Top Value Technology), the new, innovative and especially weather-resistant lightweight construction body technology of Knaus. The caravan furthermore features impact-resistant, three-dimensionally shaped plastic components of LFI (Long-Fiber-Injection), and a luggage compartment that integrates all the important connections (fresh water, 230V). Matching the automotive appearance the corner steady mounts both at the front and rear feature high-quality chrome trims. The new KNAUS Eurostar will be available at dealers starting from spring 2015 and will be priced at Euro 49,990 in Germany.