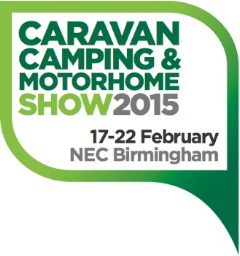 Anticipation is mounting ahead of the Caravan, Camping & Motorhome Show which runs from 17-22 February at the NEC, Birmingham. The major showcase event of the Spring season, the show will feature virtually all the major UK and many overseas manufacturers in attendance showcasing their latest products. Over 350 exhibitors covering caravans, motorhomes, trailer tents, tents, holiday homes, campsites and destinations, tow cars, awnings and porches, accessories and clubs and associations are taking stand space, making this a must-see event for anybody planning a camping holiday in 2015. 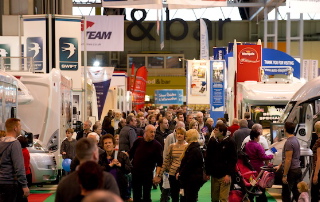 Previously known as the Caravan & Camping Show, the new name is designed to make the Show all encompassing for visitors and better attract people to their specific areas of interest and will be zoned accordingly, with distinct caravan, camping and motorhome areas.

The Caravan, Camping & Motorhome Show is ideally suited for Irish visitors with frequent flights into Birmingham Airport from all the major Irish airports. The show itself is only a short walk from the airport across to the NEC.

Among new launches at the show will be Bailey’s new, entry-level, coach-built  Approach Advance range of motorhomes. Wellhouse Leisure will have three new van conversions models including a special edition Cinquanta version of its Ford Terrier campervan to celebrate the 50th anniversary of the Ford Transit.

As well as the exhibitor stands there will be a host of side attractions to appeal to visitors. Fancy trying your hand at caravan manoeuvring? Volvo and The Camping and Caravanning Club have teamed up to offer visitors the chance to try towing a caravan under expert guidance, for free. Both seasoned caravan enthusiasts and newcomers can give towing a go in a safe and controlled environment outside the NEC. Meanwhile Marquis, one of the UK’s largest dealer networks of motorhomes and caravans, has announced that it will unveil a fifth model in the new Benimar Mileo Spanish built range of motorhomes.

One special guest that won’t be there however is outdoor survivalist Ray Mears. Having originally invited the TV star and bushcraft expert to speak at the event, organisers were forced to withdraw the invitation after he recently appeared on the BBC programmer Room 101. The show asks guests to discuss the things that drive them mad, but rather unfortunately given his pending invite, Mears nominated caravans as one of his pet hates. Organisers said: “We enlisted him as a credible ambassador because of his love of the great outdoors, something which our industry and community share. Therefore we were disappointed to hear his comments on TV, which were made and pre-recorded before we entered into discussion with Ray’s agent. We feel his agent should have made us aware of this pre-recording the moment we began communicating.

Knowing that these comments would come to light and then agreeing to work with one of Europe’s largest shows of its kind, with tens of thousands attending,  we feel he has acted in a less than professional manner.

We’re sure that if Ray spent a weekend away in a caravan or motorhome he would very much enjoy himself and realise what a fantastic enabler it is to getting outside.”