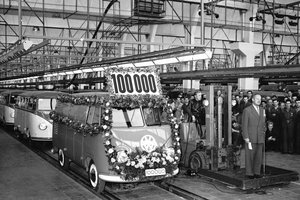 Some retire at the age of 65 – but this one is just getting started! The Bulli runs and runs and runs … production of the first Transporter from Volkswagen began 65 years ago. In the initial years, it was built in Wolfsburg, then starting in 1956 in Hannover. This date also marks the beginning of a unique automotive love story. Because today the entire model series has attained cult status. Whether hippy or tradesman – everyone is driving in the T-series.
It all begins in 1947 with a pencil sketch: the Dutch car importer Ben Pon sees a simple flat-bed vehicle at the Volkswagen plant, and, taking it as a basic idea, he proceeds to sketch the outlines of a Transporter with Beetle DNA on a sheet of notebook paper.

Two years later, Volkswagen Plant Manager Heinrich Nordhoff presents four prototypes: two panel vans, a kombi and a small bus. One of them goes to the perfume producer 4711 in Cologne. Nordhoff promises that the Transporter will be as uncompromising and robust as the Beetle: “These vehicles won’t be handled with kid gloves, rather they will be treated roughly and recklessly.”

Designers use the engine and axles of the Beetle. Instead of a central tubular frame, the bus gets a unitized body that is mounted on a ladder frame. The engine has 1131 cc of displacement and produces 18 kW at 3300 rpm. The bus can transport up to eight people. The two rear seat rows can be removed with just a few hand movements to free up load space for around 750 kg of payload.

“Accordingly,” rhapsodised Alfred Haesner, Head of Technical Development of Volkswagen GmbH from 1948 to 1952, “this type of commercial delivery vehicle can be used for all branches of business, for rush deliveries and freight, e.g. as a small bus, a special purpose vehicle, postal vehicle, ambulance or mobile station.”

Production begins on the 8th of March in Hall 1 of the Volkswagen plant in Wolfsburg, and ten vehicles are manufactured per day.

By the end of 1950, 8001 Transporters are already built. Demand is enormous, especially since it is affordable to tradesmen and retail businesses at prices starting at 5,850 German Marks. The unique vehicle quickly becomes an export hit as well. VW buses simply transport anything and everything: rubble and debris, mortar and building stones, breakfast rolls and bees wax, cigars and newspapers – everything that is needed by the “economic wonder” Germany.

A Volkswagen bus with a camping box already makes its appearance in 1951 at the automobile exhibition in Berlin. The delivery van with a rear engine suddenly holds the promise of an entirely different type of travel. For the first time, it travels over the Alps, and returns. Later, it is driven to India when hippies discover the Bulli for themselves.

Four years after its production launch, the 100,000th Volkswagen Transporter comes off the assembly line in Wolfsburg. By now, there are 30 different models of the vehicle. Daily production in Wolfsburg is 80 vehicles. It cannot produce more, because the plant is already filled to capacity with Beetle production. It becomes clear that the Transporter needs its own plant.

Construction work begins in early March 1955 in Hannover-Stöcken, and the plant is built from the ground up in just one year. In March 1956, the first “Made in Stöcken” Transporters come off the assembly line. This simultaneously represents the beginning of a future symbol of the “economic wonder years”. Today, a total of nearly 11 million T-series vehicles, spanning five generations, have been produced worldwide.

Dr. Eckhard Scholz, Chairman of the Brand Board of Management of Volkswagen Commercial Vehicles: “The production launch of the T1 represented the beginning of a decades long success story that has lasted right up to today. In the past, as well as the present, there is market demand for extremely reliable, versatile and individual vehicles. We deliver them in top quality and precisely tailored to every need – whether the vehicle is for trades work, a retail or service business, family or recreation.”

Production of the new generation model, the T6, launches this year. Along with the T-series, the Hannover-Stöcken plant also produces the Amarok pickup as well as the painted Panamera bodies, and, in Limmer, the successful California recreational vehicle. Around 12,200 people are employed at the Hannover business site of Volkswagen Commercial Vehicles.

The Poznan plant in Poland (5,700 employees) produces the Transporter and the Caddy, and another plant is currently being built in the Polish city Wrzesnia for the new Crafter. Today, a total of around 19,500 employees work for the Volkswagen Commercial Vehicles brand.