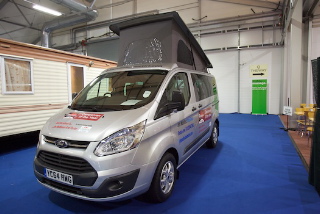 If you saw the photo on Twitter (@wellhousecamper) of the Ford Terrier cake that Wellhouse Leisure presented to Ford UK this week, you’ll know it is celebrating the sale of its 350th Terrier in less than 24 months since it was launched.

The other news from Wellhouse Leisure is:
Terrier production increasing to 250+ a year
5 new Ford retailers have joined the Wellhouse dealer network – making a total of 22
£3.4m of orders for Wellhouse Ford campervans received last month
New Terrier models to be launched at The Motorhome and Caravan Show, 13-18 October
Photos of the new Terrier models will be available shortly before their launch at the NEC show next month – as soon as the first vehicles are finished.