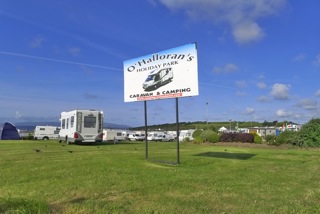 Galway, the western capital has so much to offer the tourist. It is a major hub along the Wild Atlantic Way and has beautiful beaches and the wilds of Connemara on its doorstep, which are big draws. For the mobile leisure purist, there is so much to do and see, regardless of the weather. It is easy to see therefore just why the three Caravan Parks in Salthill are nearly always full during the summer. There used to be more back in the early 70s, but since Galway County Council took over the long established one at Silverstand, it is now dormant with the only life on the 25-acre site being of the flying variety as it is now mainly a bird sanctuary. Nothing to stop it being both, but that is a story for another day.

On exiting Galway City along by the famous Prom, O’Hallorans Caravan Park, Knocknacarra is the first on the left, just past Galway Golf Club. Run efficiently by Robert Condon and his wife Gillian for the past ten years or so, O’Halloran’s site overlooking Galway Bay has many stories to tell over its 50 years or so in existence.

Little has changed since, regarding the facilities on offer really as the basic infrastructure remains. There are around 48 gravel/grass based pitches and up to 20 mobile homes are statically positioned facing the sea, all year round. There is just one small visitor block area which houses toilets, showers and washing-up area positioned at the eastern end of the site. Could do with a similar type building on the other side, but as the operators do not own the site, their hands are tied. For such a fine location, there is a need to bring it into the 21st century.

Not that caravan/motorhome/campers need lavish facilities, they don’t like having to queue and a bit more space in the shower blocks would be appreciated. There is plenty of space for even further development as more mobiles can be accommodated and a children’s play area expanded.

In fairness to the Condons, the place is kept very well, immaculately clean and well secure. A friendly welcome is assured at all times. Such is their popularity that long stay visitors come year after year, pitching their leisure vehicles for months at a time. Regarding the mobiles, there is a two-year waiting list for people wishing to take up temporary residence there. For those who wish to venture out, there is a bus stop at the gate with frequent access to the city and its many amenities. That’s the great thing going for Galway, for both adults and children there is so much happening – regardless of the weather. Big enough city to offer lots of variety, small enough to get around easy.

Across the road from O’Hallorans is a rather nice coffee shop with service station nearby. For more extensive shopping there is a big supermarket just around the corner. We hear that the Spinnaker Pub & Restaurant is to open again which is good news as it is adjacent to the caravan park. No need to drag out the camper then, just wander home from home!

Incidentally, Robert is co-owner of the Bayview Caravan Park just up the road from this place, established by his father many decades ago. It is a smaller venue and probably our next port of call when we venture back to the City of the Tribes once again. Jarlath Sweeney – Galway