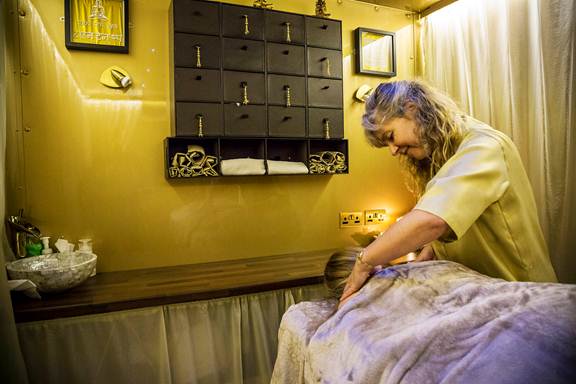 Qualified therapist Caroline Jones has turned a dream into reality, by launching a mobile deluxe treatment room based on a Mercedes-Benz Sprinter.

The Zen Ten Spa offers a range of holistic healing, well-being and pamper sessions to individuals and groups of clients. Caroline is also developing partnerships with boutique hotels, restaurants and pubs wishing to add an extra dimension to their customer experience.

The Warwick-based former BBC producer purchased her Sprinter 313 CDI Medium chassis cab with Mercedes-Benz Financial Services funding support, from Midlands Truck & Van, Coventry. She has also taken out a Mercedes-Benz ServiceCare contract, under which the Dealer will undertake all routine maintenance work for a single, small monthly payment.

The vehicle’s purpose-built and climate-controlled box body is the work of M6 Motor Bodies, of Birmingham. Fitted with a folding massage couch, a fruit bowl-style basin in pure mother-of-pearl, gossamer curtains and an abundance of gold-plated fixtures, the room has been painstakingly designed down to the finest detail, to be a relaxing and rejuvenating tranquil oasis.

Caroline, who spent 22 years making network TV programmes for the BBC in Birmingham, has been a practicing aromatherapist since the early 1990s, and is also qualified to administer a range of other treatments. She offers a portfolio of ten holistic therapies including Swedish Massage, Reflexology, Reiki, Indian Head Massage, Hot Stone Therapy and Foot Rescue, as well as other, lighter alternatives.

“It’s been more than a year since I began evolving the concept of the Zen Ten Spa and having put so much work into the project I’m really excited finally to be up and running,” she said. “My business is not a beauty parlour; it’s a spa, and aimed at a high-end, lifestyle-focused customer base. So given its premium brand values and the unrivalled quality of its products, Mercedes-Benz was the only manufacturer I wanted to work with.”

She continued: “My Sprinter is very smooth and easy to drive, as well as being impressively fuel-efficient. Thanks to Midlands Truck & Van Sales Executive Gez O’Reilly and the team M6 Motor Bodies, the finished vehicle is even greater than the sum of its parts – it’s everything I’d hoped it would be, and more.”

Caroline has also benefited from a programme of instruction delivered by the Dealer’s driver-trainer Chris Round, to ensure she can negotiate even the tightest turns to customers’ homes and premises.

She has already begun drawing up plans to franchise her innovative business concept, and added: “Groups of three have a sacred significance in some eastern religions – that’s why the name of my new business is formed from three words, each comprising three letters. How appropriate then, that my vehicle should also have a three-pointed star on the front.”

Stena Line has Euro Vision
Welcome to the European Caravan Club, a unique club Join in the Festive Fun at Dún Laoghaire Harbour this Christmas