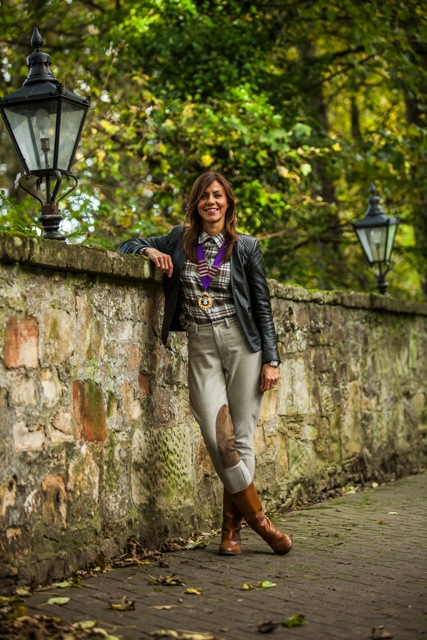 The official Show opening will take place at the Dog Agility Area in Hall 4 at 10.20am.

Andy and Julia will be joined by Show host, Andrew Dickens, and will be chatting about their current projects as well as sharing details of the entertainment on offer from both Clubs to visitors on the first day of the Show.

Tuesday is Caravan Club Day and Andy, the first person to ever break the sound barrier, will be appearing on The Caravan Club stand at 10.50am (Hall 2, stand 2000) alongside BLOODHOUND, his supersonic 1,000mph land speed car. He’ll be kick starting a whole day of fun and entertainment planned by The Caravan Club for Club members and show visitors.

Andy and Julia are just two of a long list of special guests lined up to attend the six day Show. Each day will welcome a different celebrity who’ll entertain visitors with expert demonstrations, tales of their outdoor adventures and offer inspiration and advice to those setting off on their caravan, motorhome, camping or holiday home travels this year.

Pudsey, a Border Collie, Bichon Frise and Chinese Crested powder-puff cross, won the hearts of the nation two years ago after a performance with owner 18-year-old Ashleigh Butler to Mission Impossible’s theme tune.

Visitors will be able to lap up a star performance and witness first-hand the expert skills and entertaining antics the pair have become famous for, with a number of visitors getting the chance to meet the stars personally.

The TV golden girl is best known for her role as co-presenter of the iconic children’s show ‘Blue Peter’ and for completing amazing challenges to raise funds for Comic Relief and Sport Relief.  Her accomplishments include being the first person to kayak solo the entire length of the Amazon River and to cycle to the South Pole. Other endeavours include running the 78-mile Namibian Ultra Marathon and tightrope walking between chimneys at Battersea Power Station.

Andy Torbet – Friday 21st February
TV action man, author, underwater explorer and zoologist Andy Torbet will be inspiring Show visitors with tales of dramatic outdoor encounters both on and off the camera.

The 36-year-old Scot is a paratrooper, diver and bomb disposal officer turned TV presenter, and has become the BBC’s resident ‘extreme adventurer’, performing both daring and dangerous tasks on shows including ‘Operation Iceberg’ and ‘Coast’. He has most recently been filmed free diving with Beluga Whales in Russia for a BBC documentary out later this year.

Andy has travelled the world over for both work and pleasure and attributes his love of the outdoors to years spent camping, walking and diving as a child. He’ll be sharing that passion at the Show on Friday 21st February with live talks and visitor Q & A sessions as well as getting stuck into the Show’s free have-a-go features, including a giant 10 metre high climbing wall with drop zone, kids’ assault course and mountain bike track.

Since winning Celebrity MasterChef in 2010, Lisa has established herself as a bona fide chef and has written two recipe books as well as co-presenting Channel 4’s ‘What’s Cooking’.

Her recipes are perfect for large family gatherings and include dishes that you can cook with children so they share the enjoyment of putting the meal together. Join Lisa in the Campsite Cookery area in Hall 5.

Author of camping cookbook ‘Guyrope Gourmet’ Josh Sutton, will be taking to the stove on Saturday to inspire visitors with new ideas for mouth-watering meals.

Food and travel writer Sutton is leading a food revolution on campsites across the country. The field to fork champion aims to inspire UK campers to seek out fresh local produce over processed convenience foods.

Forget burgers and beans, the camping culinary king will entertain and inspire crowds with delicious on the go recipes using local produce.

Mark Lloyd – Sunday 23rd February
Chef, presenter and wild food expert, Mark Lloyd will inspire visitors to the Show on Sunday with recipes that use ingredients from the Great British countryside.

The former River Cottage head chef has cemented a reputation as one of the leading foraging experts, creating delicious food using ingredients from what he describes as the ‘wild larder’.

A TV regular, Lloyd has appeared alongside The Hairy Bikers and took part in BBC America’s Chef Race UK v US, made by Jamie Oliver’s Fresh One. A contagious passion for foraging for nature’s wild edibles combined with extensive knowledge of how best to prepare the ingredients makes Lloyd an inspirational presenter.

Great Value Family Day Out
The Caravan & Camping Show is the UK’s biggest start of season showcase. Occupying 70,000m2 of the Birmingham NEC (the equivalent of 1750 average size campsite pitches) the Show unites all the leading manufacturers, dealers, importers, accessory specialists and destination experts under one roof.

It’s an essential first port of call for anyone considering a caravan, motorhome, campervan, holiday home adventure with the opportunity to browse and buy all the latest models, pick up useful tips and advice from hundreds of industry experts, discover and book exciting new destinations and days out attractions and stock up on essential outdoor leisure accessories – many at ‘show only’ prices.

With half term dates and an affordable ticket price – advance tickets are just £7 for seniors, £8 for adults and kids under 16 years go free* – the Show is a fun-filled day out for all the family with free ‘have-a-go’ attractions for visitors of all ages. Show-goers can have a go at rock climbing, mountain biking and a specially designed children’s assault course, all under expert tuition.

Tickets include free parking and a show guide (subject to availability). To book call 0844 581 1250 or visit the website at www.thecaravanandcampingshow.co.uk