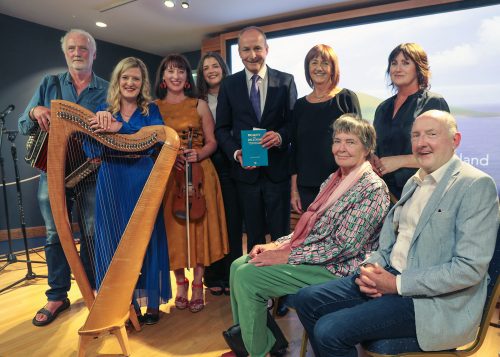 Last Thursday 4th August 2022, at an event at the newly refurbished and reopened Blasket Centre at Dunquin, Co. Kerry, An Taoiseach Micheál Martin T.D. officially launched Beauty An Oileáin – a new book and CD collection released yesterday via Claddagh Records that celebrates the stories, songs and heritage of The Blasket Islands.

This new collection brings to light never-before-published information and stories that offers an enthralling voyage into the traditional music and song of former islanders and their descendants. Featuring 26 wonderful tracks with extensive sleeve notes in both English and Irish by renowned Irish folklorist and Director of the National Folklore Collection at University College Dublin, Ríonach uí Ógáin.

Originally released on CD in 1993 on Claddagh Records, Beauty An Oileáin then included a selection of 17 tracks of music, song and spoken word from former Blasket Islanders and their descendants. Since 1993, additional archival recordings have come to light and are included in this new release.

The limited-edition collection commemorates and preserves the music and song of The Blasket Islands – a collection of islands nestled in the Atlantic Ocean off the coast of Co. Kerry, the most south-westerly point of Ireland.

The renowned music collector and broadcaster Ciaran MacMathuna and his wife, Dolly McMahon introduced Claremorris born Garech Browne, founder of Claddagh Records, to the Blasket Islands on a visit in the summer of 1977.

Browne had founded Claddagh Records in 1959 to preserve Ireland’s rich musical and spoken word heritage, then under threat from the pop music from the UK and the US, Radio Luxembourg and the start of the showband era in Ireland.

Ciaran MacMathuna was a major inspiration for Garech Browne – son of Lord Oranmore & Browne and Lady Oonagh Guinness – and he encouraged Claddagh Records to include in its plans a record on the music of The Blaskets.  Of particular fascination to him was the song ‘Port na bPucai’, or, ‘The Tune of the Fairies’.

James Morrissey, Chairman, Claddagh Records, says: “This collection is rooted in the very rich musical heritage of The Blasket Islands. Like ‘Port na bPucai’, played here by Seán Cheaist Ó Catháin, it is on the Atlantic air to be transported to audiences anywhere and everywhere our past can accompany us into the future.

“Before Garech Browne passed away in 2018 he was eager to reissue Beauty An Oileáin along with several other projects featuring other artists on the Claddagh label including The Chieftains and the poet Patrick Kavanagh,” he added.

Last year saw the relaunch of Claddagh Records through the signing of a worldwide licensing agreement with Universal Music Ireland to enable global access to the label’s rich reservoir of recordings which have been preserved in the vaults for decades. This agreement was marked by the release of the singular record Chronicles: 60 years of The Chieftains. Further releases are planned for 2022 including Bear’s Sonic Journals: The Foxhunt, The Chieftains Live in San Francisco 1973 & 1976 and more to be announced.

Beauty Án Oileán is available on CladdaghRecords.com and from select retailers now.

Renault starts a new chapter with its adventu...
New Chill study reveals the Irish road trips that are the best value for money 💸 “Jewel in the Sun” to host ‘Jewel in World Yachting’ as the 37th America’s Cup comes to Barcelona in 2024