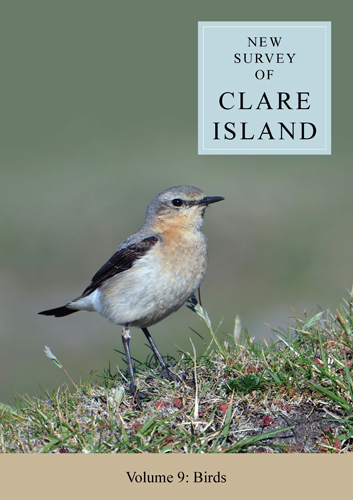 Explore Clare Island’s avifauna, including the seabirds, land birds and waterbirds, and investigate the curious absence of breeding rooks from the island. This volume features a systematic list comprised of records of bird sightings that stretch from 1887 to 2018. The result of almost 20 years of fieldwork, it is an invaluable source for future monitoring of birds on Clare Island and beyond.
The first Clare Island Survey of 1909–11 was the most ambitious natural history project ever undertaken in Ireland and the first major biological survey of a specific area carried out in the world. The ‘Birds’ paper included in that survey was written by Richard J. Ussher and was based on fieldwork conducted on the island between 1909 and 1911. Ussher’s ‘Aves’ paper, however, also summarised details of the avifauna of a wider area in the west of Ireland—mainly the Counties of Galway and Mayo—a theme that was revisited several times by the late Major Robert F. Ruttledge. The current ‘Birds’ volume focuses exclusively on Clare Island and applies modern methods of census.

About the author:
Thomas C. Kelly is a retired lecturer in Zoology at University College Cork. He holds a PhD on the ticks and viruses in seabird colonies around Ireland and has published papers on bird – aircraft interactions, Long Distance Dispersal (LDD) and mathematical models of memory in predator-prey systems, novel virus epidemics in seabird colonies, and population dynamics of the woodpigeon and lesser black-backed gull.