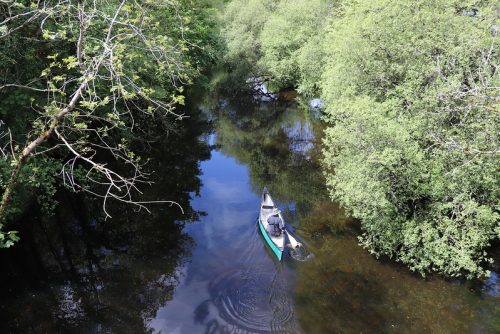 New presenter, Diarmuid Ó Drisceoil brings you the story of the River Blackwater, An Abhainn Mhór na Mumhan. Following in the footsteps of Annraoi Ó Liatháin using his book Cois Móire as a travel guide, Diarmuid will travel this spine of river, from its source near the breast of the Goddess Danú in Kerry, into Mallow, Fermoy, onto Lismore, Cappoquin and finally its mouth at the sea in Youghal. Diarmuid will bask in the natural environment of the of river while telling its story, bringing its vast history and personality to life through ruins of historic buildings, and energetic modern communities, capturing and reflecting the wealth of the rivers natural ecology. Largely inaccessible by land due to forestry and private ownership, it has preserved its natural beauty and remains a witness & a timeless haven from a world beyond its banks, that is ever changing. The series is produced and directed by Darina Clancy Cormorant Films.

Mayor of the County of Cork, Cllr. Danny Collins said: ‘Cork County Council is delighted to be a key sponsor of the Cois Móire documentary series. The Blackwater is of great significance to Cork County, flowing in an Easterly direction through Millstreet, Mallow, Fermoy and Youghal, where it joins the Celtic Sea. I am sure viewers will be captivated by the distinctive character of the region, with everything from the military history of Fermoy to the enchanting music of the Sliabh Luachra music trail, the majestic Drishane Castle in Millstreet and the famed Raleigh Quarter in Youghal. I would like to congratulate Cormorant Films for producing this excellent series highlighting Cork’s past and present along the River Blackwater and look forward to seeing many more visitors to Cork County to discover the vast history, rich culture, unique landscape and incredible stories spanning centuries that the Blackwater holds, from Celtic times to present day.”

Cois Móire was supported by the BAI through its Sound and Vision scheme and by Creative Ireland, Waterford.

Stena Line has Euro Vision
Legends of The Ocean Race invited to celebrate in Genova, Italy Could you live (and travel) on four wheels? - New book: ROAD LIFE