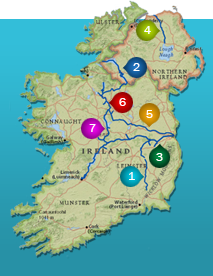 The Minister for Transport, Tourism and Sport, Paschal Donohoe TD, and the Minister of State for Tourism and Sport, Michael Ring TD, have welcomed the CSO data which shows that the number of overseas visits to Ireland between February 2015 and April 2015 increased by 13.5% compared to the corresponding period of 2014, saying the continued strong growth in tourism is contributing to our economic recovery and the creation of jobs across the sector.

Welcoming the positive data, Minister Donohoe said: ‘This is further good news for the tourism sector. As we enter the peak months for tourism, it is very encouraging that the growth trend witnessed in recent years is continuing in 2015 with a very strong performance for the first four months of the year. Thankfully the growth is not confined to any particular market with good growth being displayed by all of our key target overseas markets. Our overseas marketing efforts will continue in the months ahead to ensure the momentum is maintained, that jobs continue to be created and that tourism continues to pay its part in our future economic development’.

Minister Ring added: ‘Our focus on the tourism sector is paying significant dividends and we will continue to invest in a sector that is uniquely capable of bringing economic benefits to the more remote parts of the country. Tourism is a key part of the Government’s economic strategy and we have set ambitious targets for growth in overseas visits, associated revenue and increased tourism employment in the period right up to 2025. I am confident that if the tourism industry continues to offer quality experiences and good value, we will achieve these targets’.

Niall Gibbons, CEO of Tourism Ireland, said: ‘Today’s figures represent a stunning start to the year. Our aim is to ensure that 2015 is the best year ever for Irish tourism and already we have seen an exceptional performance from North America for the three-month period of February to April – up +20% on the same three-month period in 2014. Ireland now welcomes 10% of all American visitors to Europe – particularly noteworthy given the intense competition from other destinations. Mainland Europe has also turned in a stellar performance (+14.7%) – with important markets like Italy (+42%), Spain (+25%), France (+15%), Germany (+10%) and Benelux (+11%) all recording fantastic growth. It’s also been another record three months for our longer-haul markets, up +23.6%; and I also welcome the strong increase in British visitors (+9.8%), our largest market for overseas tourism. Today’s figures very much reflect the sentiment expressed by our tourism industry partners overseas, including tour operators and carriers, as well as tourism businesses here at home’.

Shaun Quinn CEO of Fáilte Ireland stated: ‘With all our key markets delivering an overall increase of almost 14%, tourism businesses around the country are upbeat and seem set for one of our best tourism seasons yet. Our experience and value for money ratings are continuing to improve, making Ireland a much more popular holiday choice than before. The appeal of our Wild Atlantic Way continues to increase and with growing interest the Ireland’s Ancient East and Dublin brands, the future looks bright for jobs and earnings in Irish tourism’.