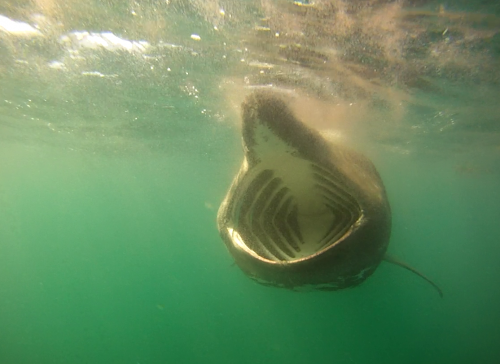 New research has revealed that basking sharks overwintering in tropical waters off Africa experience cooler temperatures than those remaining in Ireland.

The research, published in Environmental Biology of Fishes, provides evidence to challenge previous assumptions that their disappearance from Irish coastal waters was linked to their search for warmer waters.

Basking sharks are a regular visitor to Ireland’s shores in summer months. It has been widely believed that basking sharks prefer the warmer waters and that their seasonal disappearance is linked to falling water temperatures.

Through the tracking devices, the research team discovered that two of the sharks travelled vast distances to the subtropical and tropical waters off Africa whilst the others remained in Irish coastal waters throughout the winter. The sharks off the coast of Africa experienced colder temperatures on a daily basis than the sharks that resided in Ireland, suggesting that they didn’t move south simply in search of warmer conditions. The cooler temperatures experienced off Africa resulted from the sharks diving each day to depths of up to 600m, most likely in search of prey.

Dr Emmett Johnston, Lead Author from the School of Biological Sciences at Queen’s University Belfast, said: “Our findings challenge the idea of temperature as the main reason for winter dispersal from Ireland. Likewise, further evidence of individual basking sharks occupying Irish coastal waters year-round has significant implications for national and European conservation efforts. Now we know that basking sharks are foraging at these depths, it shows that these habitats should be considered alongside coastal hotspots in future conservation efforts.”

Dr Jonathan Houghton, Co-author from Queen’s, added: “This study tempts us to think about basking sharks as an oceanic species that aggregates in coastal hotspots for several months of the year (most likely for reproduction), rather than a coastal species that reluctantly heads out into the ocean when decreasing water temperatures force them to.”

Co-author, Dr Paul Mensink from Western University, added: “Our findings highlight the need to understand the role of deep, offshore foraging habitats for a species so commonly sighted just a few metres from our shores.”

The international team will continue to monitor basking sharks as part of the EUSeaMonitor project to help inform and develop a collective conservation strategy for wide ranging species that have inhabited our waters for millennia.