‘Corrie’ Soap Star on the Bailey! 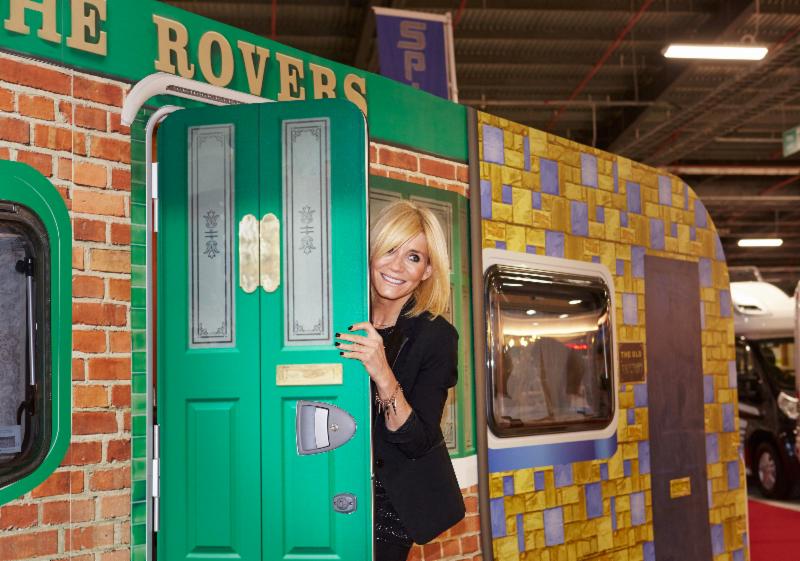 Fans of the ITV soap Coronation Street swamped The Caravan Club stand at the opening of The Manchester Caravan and Motorhome Show to see Michelle Collins (the show’s Stella Price) step in to a rather unusual Bailey caravan.

Michelle Collins felt instantly at home inside the caravan, not only thanks to its familiar items of Coronation Street-themed decor, including the infamous wooden flying duck ornaments, but also because she is a Caravan Club member and said she is planning a touring holiday to Italy later this year.

She said: “With a caravanning holiday you can be independent; you can take them abroad and don’t have to worry about checking in your luggage.

You’ll see me on the show for a little bit longer, and then I’ll be heading off in a caravan,” she continued.

The ‘Corrie-van’ makeover was based on a Bailey Orion, the predecessor of the new, lightweight and affordable Pursuit range, which was Bailey’s best-selling model range at the show.

Simon Howard, Marketing Director, Bailey of Bristol commented: “We were delighted to work with The Caravan Club and have some fun helping to attract lots of publicity for The Caravan and Motorhome Show in Manchester and also for caravanning in general.

The high profile of a celebrity like Michelle Collins helped the Corrie-Van grab loads of headlines across the media. We haven’t seen so much coverage of a Bailey caravan in the national papers since Her Majesty the Queen came to see us in Bristol two years ago!” he continued.