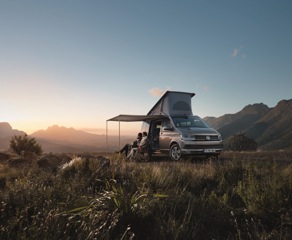 One of the most iconic vehicles on sale today has just had a makeover. Volkswagen has unveiled the new T6 California, the sixth generation of the modern day successor to the legendary air-cooled T1 and T2 camper-vans that defined a whole new category of leisure vehicles.

For an exclusive Irish first drive of the latest Transporter California, Caravan Cruise Ireland headed to Norway, land of never-ending fjords and spectacular scenery. Our schedule not only involved testing the camper’s driving performance on some awe-inspiring roads, but included some wild camping in a truly secluded valley – in weather conditions very similar to the rather miserable Irish summer we are experiencing!

The first noteworthy observation is that what had been a single model is rapidly becoming a fully-fledged family of camper-vans. The last generation saw the introduction of the California Beach model – an entry level model minus the kitchen area, which wasn’t offered for sale in Ireland. That version is retained for the T6 generation, while Volkswagen now offers two other variants – the California Coast and the California Ocean. Both are fully equipped with kitchen and living quarters, with the main differences being that the cheaper Coast has a manual pop-top roof and single glazed windows in the passenger compartment, as opposed to the electro-hydraulic roof and double glazing in the Ocean model.

The latest California is of course based on the T6 version of Volkswagen’s mid-sized Transporter van, and many of the improvements and refinements are on the mechanical and engineering side. Notably new TDI engines that are quieter and more fuel efficient, while there’s a host of safety and driver assistance systems not previously available. On the move, the California feels noticeably quieter and more refined than previous generations.

The cabin too has had a significant makeover, and exudes an upmarket quality with soft touch finishes and equipment levels that belie its humble van origins. Sitting in the comfortable Captain style driving or passenger seats, you’ll be hard pressed to find more comfortable ways to while away long journeys. Most of the camping side of the California has been carried over from the previous model, though a number of detail changes bring further refinement to what is a proven design. For instance, it’s now easier to slide the rear bench forward and back, opening and closing the blinds has been improved, and LED lighting is now fitted all-round.

Minor details in themselves perhaps, but part of the ongoing refinement process that has the California much loved for its practicality, durability and overall ease of living with. Over sixty years since the VW camper van story began, the new T6 California is well set to attract a whole new generation of enthusiasts to the outdoor and camping lifestyle.

A full review of the new Volkswagen T6 California will appear in the next issue of Caravan Cruise Ireland. Cathal Doyle – Norway Bailey of Bristol appoints Steve Bruce as its...
Campervans & Motorhomes most eco-friendly! Truma iNet System paves the way for a networked future